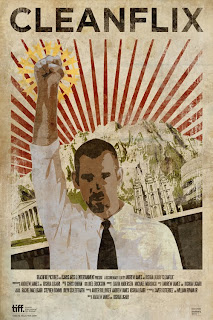 No doubt it isn't just Mormons who would like to see less sex, violence, and profanity in Hollywood films. They're just the ones who decided to do something about it. Ray Lines got an idea to make edited versions of Hollywood blockbusterst for his Mormon friends and family. Soon, though, he started selling his family-friendly edits to video stores in the Utah area, eventually spreading out nationwide. For a few years, the business was successful and largely flew under the radar of Hollywood. That is until Daniel Thompson, a video store owner who purchased some of his movies from Cleanflicks, decided to take the Director's Guild of America and some of the major studios to court.

The documentary CLEANFLIX tells the story of the rise and fall of Cleanflicks, and how much to the chagrin of Ray Lines, his company's name became tarnished by its association with Thompson. Some might argue that even this film devotes more time to the shocking twists in Thompson's personal life than is warranted and, in doing so, draws attention away from the less sordid but nonetheless fascinating story of the actual business of Cleanflicks and the legacy it left behind. Then again, Thompson seems so willing to talk about even the most sensitive of subjects, how could any filmmaker resist?

The most surprising thing about CLEANFLIX is how easy it is to feel sympathy for Lines and his customers. Yes, censorship is a bad thing, and why anyone would want to watch a version of THE GODFATHER devoid of sex, violence, and profanity is beyond my reasoning. Would that even be feature length? Still, to each their own. As long as I can see Sonny Corleone get riddled with bullets, let the folks in Salt Lake City see a version of the movie that cuts away from the carnage. In fact, the studios already have toned-down airline and network TV versions of their films that they could make available to rental stores, but they choose not to. If it's really a case of artistic integrity, as some claim, then why does that integrity end as soon as one is airborne?

Fortunately for those who like their movies sanitized for their protection, new technologies have come along that do essentially the same thing Cleanflix did, only without actually tampering with the movie. Fat lot of good that does Ray Lines, the guy who first saw a demand and tried to supply it. At least this documentary lets him tell his side of the story and distance himself from Thompson. 3 out of 4 stars.