White Heat (January 12th and 13th at the Cleveland Cinematheque) 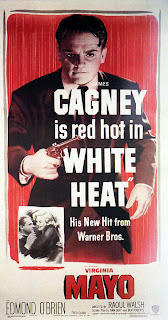 James Cagney plays a sociopathic and narcissistic criminal with severe mommy issues in the classic film noir WHITE HEAT. If you’re a noir lover, this one shouldn’t be missed. And I must say that seeing it on the big screen would be a treat as the action scenes -- especially the ending scene -- don’t feel horribly dated. Cagney gives an intriguing and powerful performance as Cody Jarrett. He is accompanied by the ever beautiful Virginia Mayo as his wife, Verna Jarrett.

After an intense train robbery, Jarrett and his gang (including his mother, Ma, and Verna) are on the run. Eventually, Jarrett winds up in jail and concocts an elaborate escape with another convict -- who is actually an undercover police officer.

Jarrett is a bad man, to be sure. He kills in cold blood and disrespects his wife -- who can’t be trusted either. However, especially during the jail scenes, Cagney elicited a certain degree of sympathy from me. Not because Jarrett was a particularly sympathetic character but because of Cagney’s powerful performance. Cagney plays the mentally disturbed Cody Jarrett with ease and grace -- well, as graceful as a portrayal of a mental illness can be.

Virginia is the typical film noir female. She’s an untrustworthy, conniving and selfish gold digger. But I often found myself pitying her character, especially after her being abused by Jarrett. However, she’s not as helpless as the men around her think she is. In fact, she may or may not have gotten away with murder (I won’t say whose death but it’s unclear who the real killer is). Again, your typical noir female: not quite a femme fatale but certainly not a damsel in distress.

I think the largest flaw with WHITE HEAT was the wholly uninteresting police force. While it was interesting to see the late 1940’s take on police procedures, I just never felt compelled to cheer them on. They were flat and stale caricatures. I think that may have been a missed opportunity. If the police had been more relatable and organic, another dimension would have been added to the film. It would have been even more difficult to choose who to root for and thus made the film more engaging and thought provoking.

Freud would have had a field day with this one. Jarrett’s mommy issues add a creepy and disturbing element to the narrative. At one point he is seen sitting on her lap as she strokes his head. Jarrett’s Oedipus complex is eventually what drives him to create careless mistakes and fuels his self destruction. The melodrama of his illness adds a special spin on the otherwise typical crime film.

Overall, I can easily understand how WHITE HEAT has remained a popular noir classic. It’s unique and captivating with exceptional performances. If you’re a noir lover don’t miss this one! 3 out of 4 stars.
Posted by Marcie Gainer at 12:48 AM