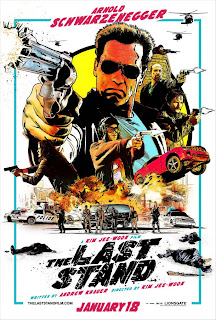 Arnold Schwarzenegger took leave from cracking skulls back in 2003 to pursue other interests.  Little hobbies, you know, like presiding over the State of .  The cinema strongman popped up with Planet Hollywood partners Sylvester Stallone and Bruce Willis in the ensemble actioner THE EXPENDABLES and its recent sequel, but now the Governator really is back in THE LAST STAND.

Schwarzenegger is Sheriff Ray Owens, a single, over-the-hill cop whose idea of a busy work day in Sommerset begins and ends with ticketing cars parked in fire zones.  But Owens gets a wake-up call (literally and figuratively) when death-row drug lord Gabriel Cortez (Eduardo Noriega) escapes federal custody and makes a dash for the Mexican border in a tricked-out prototype Corvette that does 197 mph on a dark desert highway [yes, a random Eagles reference].  The lead-footed fugitive has carefully orchestrated his getaway from behind bars, anticipating every roadblock and FBI counter move.  Cortez hires Burrell (Peter Stormare) and a band of machinegun-toting thugs to clear his path out of and takes a hostage passenger to discourage the authorities, who horribly underestimate his freakish skills behind the wheel.

FBI Agent John Bannister (Forest Whitaker in grumpy bureaucrat mode) calls to warn Owens but doesn’t expect the two-bit lawman to offer his quarry much resistance.  But Bannister doesn’t know Owens has already investigated a bloody mess left by Cortez’ prep team and—following a deputy’s death on the outskirts of town—has committed himself to stopping the Hispanic Speed Racer.

Korean director Kim Ji-Woon’s first American production is brisk, and brims with the sort of over-the-top action we expect, er…expected from Ah-nold films.  Cortez’ escape is a well-oiled suspense sequence with some clever twists that steer it away from caper cliché.  Later, we’re treated to a surprisingly tense car chase in a corn field, where neither driver knows the other's location after applying the brakes.  The climax on features a makeshift barricade of school buses and pickup trucks, a toppled telephone pole, lots of explosions and broken glass, and weapons and armor dating back to the Crusades.  The onscreen timestamp isn’t needed but does remind us the clock is tick-tick-ticking for Bannister and Owens:  The whole affair occurs in less than twenty-four hours.

Then there’s the obligatory knock-down, drag-out fisticuffs between hero and villain (or in this case old dog and young pup).  The slower, beefier Owens relies on bear-like wrestling moves and heavy punches when sparring with his suave, arrogant, karate-kicking opponent.  The age discrepancy is apparent during the showdown, and it’s a wonder Schwarzenegger’s Centrum slugger holds up against the kung fu kid for as long as he does.

“Thousands of illegals cross the border every day,” hisses Cortez.  “What’s the difference if one goes back?”

“You f*cked up my day off,” comes Schwarzenegger’s best zinger in a decade.

The score—by Asian composer Mowg—is effective but generic.  We get an earful of loud, fast-paced percussion whenever someone stomps an accelerator.  Or a dose of maudlin, made-for-TV music when a good guy goes down, or Frank and Sarah ponder their troubled romance, or when Owens gives sage advice to his conflicted young colleague, faux violins cued perfectly to Schwarzenegger’s “Look, Jerry….”

THE LAST STAND earns its R with liberal profanity and gun violence.  But the laugh quotient is remarkably high for a Lionsgate release (the distributor derives its bread and butter from gruesome military movies like RAMBO and THE EXPENDABLES and witless torture porn like SAW).  JACKASS stuntman gets up to his usual antics and Guzman is in full “exasperated sidekick” mode.  Weapons and vehicles—all named after women—become fodder for a couple great gags that offset the bloodletting in a dark sort of way (keep an eye on Dinkum’s flare gun).  Stormare (FARGO, LOST WORLD: ) is superlative as Cortez’ amoral enforcer, Burrell, who beckons Owens for the HIGH NOON showdown (think Brad Wesley in ROADHOUSE).  Harry Dean Stanton (last spotted in THE AVENGERS) has a memorable cameo as a disgruntled dairy farmer.

’s acting skills haven’t exactly improved over time, but nobody ever bought a ticket for a Schwarzenegger film and expected Shakespeare.  We made the former bodybuilder wealthy and famous (and governor) because we liked how he looked firing RPGs, hurling knives, and swatting aliens with tree trunks.  His hair is visibly thinner and his middle thicker, but who cares?  At 65, ’s just as charismatic in 2013 as he was in 1988.  He’s played policemen before, only now he’s wearing boat mocs, sipping decaf, and calling his boss a “schmuck” instead of  “motherf*&ker.”  He dispatched an entire army with farm equipment and power tools in COMMANDO, but now he’s the law enforcement mentor shaking his head in disbelief whenever his protegees overreact.

Here’s hoping additional age-appropriate scripts land on ’s desk.  THE LAST STAND is a guilty pleasure, but certainly not Schwarzenegger’s last hurrah.  2 ½ out of 3 stars.
Posted by Peter M. Roche at 12:01 AM