The Big Picture (January 4th and 5th at the Cleveland Cinematheque)

[THE BIG PICTURE screens Friday January 4th at 9:40 pm and Saturday January 5th at 7:25 pm at the Cleveland Cinematheque.] 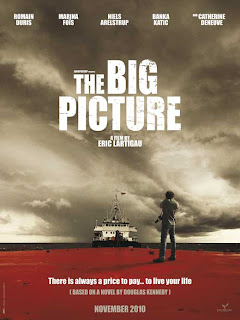 Paul (Romain Duris) gave up his passion for photography in order to support his family as a lawyer. In doing so, he has driven his wife Sarah (Marina Fois) into an affair with Grégoire (Eric Ruf), another photographer whose trust fund and lack of commitments has allowed him to continue his artistic pursuits. When Sarah tells Paul she wants a divorce, he confronts Grégoire. After a brief scuffle, Grégoire is dead and Paul sees a chance to take back the life that should have been his by borrowing the dead man's identity. Faking his death, Paul leaves the country and finds his camera work is a ticket to success. Unfortunately, too much success threatens to reveal his secret.

The plot contrivance that drives THE BIG PICTURE is pure crime/suspense material, but this is really more of a drama about a man learning the hard way that it's better to be true to oneself than to compromise for traditional ideas of success. The question is, has Paul learned his lesson in time to get his life on the right path, or is he already doomed?

THE BIG PICTURE is a solidly made, well acted film that just doesn't quite resonate. Although Duris gives an excellent performance throughout, his character isn't particularly likable to begin with, and it's arguable whether one last minute good deed really serves to redeem him. Then again, who in real life truly gets the chance to make up for all their mistakes? Maybe we should all be so lucky as Paul to at least tip the scales a little back in the right direction. 3 out of 4 stars.
Posted by Bob Ignizio at 12:24 AM