Sleep Tight (January 24th and 25th at the Cleveland Cinematheque) 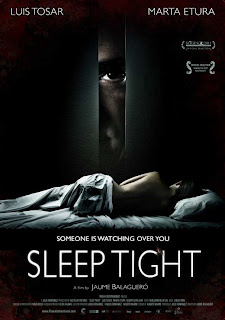 If nothing else, Jaume Balagueró's SLEEP TIGHT offers up a delightfully creepy set up. We're introduced to Cesar (Luis Tosar), the concierge at an apartment building who believes he was born without the capacity for happiness. Nonetheless, he wakes up each day trying to find a reason to keep on living instead of throwing himself from the roof of the building where he works. One might think that sharing a bed with the lovely Clara (Marta Etura) should be reason enough, but as we soon learn things aren't always as they appear on the surface. Why does Clara treat Cesar as just a lowly employee on her way out of the building, and what sort of transaction is the adolescent girl Ursula (Iris Almeida) conducting with him? Even though we get the answers to these questions fairly early, Balagueró still manages to maintain a heavy atmosphere of suspense throughout SLEEP TIGHT.

Like PSYCHO and HENRY: PORTRAIT OF A SERIAL KILLER before it, SLEEP TIGHT offers its audience a sociopath for a protagonist and then asks us to identify with him to some extent. Cesar doesn't possess the same sort of innate likability as Norman Bates or Henry, but neither is he a completely unsympathetic character. As creepy as we know him to be, there are moments in the film where Balagueró manipulates us into fearing he might get caught.

Still, this is a taught, well made thriller that delivers sufficient thrills and chills. The actors, especially Tosar, all do fantastic work. Although Balagueró made his name directing the “found footage” horror films [REC] and [REC] 2, his earlier films like THE NAMELESS were in the vein of classic, stylish horror, and he returns to that approach here. This is easily as slick as any Hollywood horror/suspense film, and considerably smarter and grimmer.

That said, even when we reach the end of the film, it feels like there's some important part of Cesar's story that's missing, some implied past connection between him and Clara that never gets fully clarified. As much as I hate movies that feel the need to spoonfeed everything to their audience, a little more information here might have made a big difference. 3 out of 4 stars.
Posted by Bob Ignizio at 12:32 AM