[SEARCHING FOR SUGAR MAN screens Saturday January 5th at 9:40 pm and Sunday January 6th at 6:30 pm at the Cleveland Cinematheque.] 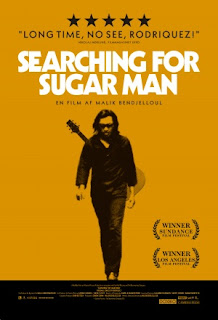 What art is good enough for recognition in the United States? It seems that all we see are constant streams of talent searches on our tubes. It’s as if we are lacking in an artistic citizenry. The truth is, that’s never been the case. Who and how people become famous in this country has always had a bit of luck involved. Sixto Rodriguez (“Sugar Man”) was not one of the lucky ones.

SEARCHING FOR SUGAR MAN is a documentary that brings us to 1970’s Detroit, a city not much different then the one we recognize today. Industry everywhere and a city stuck in between fame and decay. At the time, however, talent had a way of making its way out of Detroit (Aretha Franklin, The Supremes, Smokey Robinson, Stevie Wonder).

During the daytime Sixto Rodriguez was a blue-collar construction worker in the city, and at night he was one of the most gifted singer-songwriters in the country, with a knack for turning his back to his audience. It didn’t take long for people to find Rodriguez in the back of smoky bars, and before long he had recorded two albums in two years: Cold Facts (1970) and Coming From Reality (1971). Sadly, America wasn’t paying much attention.

As the story goes, an American girl visiting her boyfriend in apartheid torn South Africa brought her copy of the Cold Facts album, which had been censored in South Africa due to the rebellious sentiments found in the lyrics. The government went as far as to scratch out particularly offensive tracks so it could not be played out over the airwaves. Naturally this agitated country gravitated to the message, and bootleg copies sprung up all across South Africa. Over the decades Rodriguez became a superstar in South Africa (it is thought he was sold some 500,000 copies of Cold Facts there) and claims are made that in South Africa, he is more famous than Elvis.

However, there was never any hope that Rodriguez would tour South Africa as legends spread of his public suicide during a show. Stories include him shooting himself mid-set, or another in which he lights himself on fire during a show.

SEARCHING FOR SUGAR MAN revolves around the search for Rodriguez. Is his death story true? What more can we learn about a man who made two albums and then seemed to disappear of the face of the Earth? In his first feature film, director Malik Bendjelloul handles everything with great care. The film is as much about its soundtrack as it is the story. If you’re a fan of singer-songwriters such as Bob Dylan and Paul Simon, you’ll feel right at home here. In fact, you’ll end up kicking yourself for missing out on Rodriguez for so long.

One of the most intriguing things about SUGAR MAN is how beautifully it’s shot, and at times it also mixes in animation. The film has almost nothing but likable figures at its core, and it’s impossible not to get caught up in the search for Rodriguez. It’s a rare occasion in film where you hope everyone finds what they’re looking for, but SUGAR MAN certainly succeeds in that respect.
Posted by Bob Ignizio at 12:00 AM