[RUST AND BONE opens in Cleveland on Friday January 18th exclusively at the Cedar Lee Theatre.] 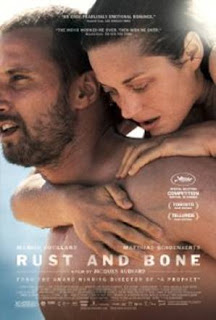 Based on short stories by Canadian author Craig Davidson, the French movie RUST AND BONE is an interesting mix of yin and yang. Writer-director Jacques Audiard said he decided to change the short stories' protagonist — a man who loses his legs in a killer whale attack — into a woman, because he'd had enough men in his previous movie, the highly regarded 2009 prison-gangster drama A PROPHET. The modification provides an unusual interplay of tenderness and brutality.

Our hero, Ali (Matthias Schoenaerts), leaves Belgium with his young son in tow. Committing petty theft along the way, he's headed for the home of his sister, whom he hasn't seen in years, and her husband in Antibes. A brutish and indifferent father with a predilection for fighting, Ali finds work as a club bouncer, where one night he rescues a pretty young woman, Stéphanie (the marvelous Marion Cotillard), from a violent abuser. He drives her to the home she shares with her boyfriend, who looks at Ali with resentment; Stéphanie, meanwhile, is attracted to her rescuer's strength. Ali is a primitive; we see him having quick, vigorous sex with a variety of casual pickups. Having pegged Stéphanie, in her short skirt, as a slutty club girl, he's surprised to learn that she's a professional whale trainer who directs the beautiful orcas in the choreographed shows they're compelled to perform at the Marineland park. (Later, there's a beautiful and moving scene in which Stéphanie, having suffered a tragic injury, returns to visit one of her beloved orcas and communes with him through the glass of his tank.)

The film is at its best portraying the aftermath of the horrible accident that leaves Stéphanie maimed and depressed. In one of the starkest scenes, we see her awaken in a hospital room, alone under harsh fluorescent light, discovering with horror the extent of her injuries. She contemplates suicide, but settles into a grim new existence. She decides to call Ali, who forces her out of her mean, insurance-provided apartment and into the daylight. He takes her to the beach, carrying her to and from the sea so she can swim. Ali's toughness is an asset, because he doesn't flinch at Stéphanie's injuries, nor is he excessively sympathetic. He's dry and matter-of-fact, and his pragmatic approach is just what the equally tough Stéphanie needs to encourage her to rejoin the world. When the two become lovers, it's also approached pragmatically: Ali tells Stéphanie to text him when she wants sex, and he'll tell her whether he's “OP” — operational (available and willing).

Characteristically French labor themes figure into the story, as Ali finds a job with a shady security company illegally hired by companies to spy on their employees, a gig that later has painful repercussions in Ali's life. On the job, he hooks up with a man who organizes bare-knuckle fights, and Ali, an amateur boxer with a love for fighting, jumps at the chance to make money at it. Stéphanie, who's also attracted to violence, asks to ride along to the fights and is fascinated by the bloody bouts. The bare-knuckle fights, oddly, become her pathway to a new life, and it's a joy to see her physical transformation from sad victim to proud, tough woman walking on prosthetic legs. This is a movie about transformation –— Stephanie's physical and emotional reconstruction and Ali's transformation, through helping Stéphanie and through a (somewhat contrived) near-tragedy of his own, from a hard, selfish brute to a person capable of caring. 3 out of 4 stars