Repost: The Well Digger's Daughter (January 4th and 6th at the Cleveland Cinematheque)

[THE WELL DIGGER'S DAUGHTER screens Friday January 4th at 7:30 pm and Sunday January 6th at 4:00 pm at the Cleveland Cinematheque.] 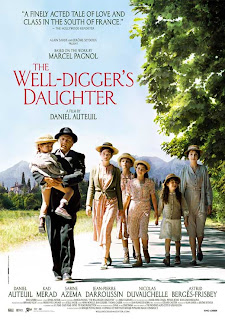 Watching THE WELL DIGGER’S DAUGHTER gave me the mild suspicion that under the guise of an ultra-serious foreign drama I was watching a subversive satire of ultra-serious foreign dramas, one that was going right over my poorly paid head. It’s happened to me before. I won’t give exact circumstances, but it was a Russian import, and local filmmaker Laura Paglin could tell you all about my mistake in not getting the joke.

THE WELL DIGGER’S DAUGHTER is a remake of a 1940 French picture of the same title (LA FILLE DU PUISATIER) from revered filmmaker Marcel Pagnol (1894-1974). Monsieur Pagnol specialized in rural or seaside dramas, set well outside perennial locale Paris, depicting life, love, infidelity and family stuff amidst the rustics. And while he is well-remembered by cinemaphiles, a common interpretation is that he was part of the stodgy old guard of visually unimaginative French filmmakers against whom the young upstarts of the New Wave like Godard, Truffault, Chabrol etc. openly rebelled.

So is the WELL DIGGER’S DAUGHTER Reloaded, from 2011, a lush, loving tribute…or a spoof of the days of le cinema d’antan? When fields of golden grain waved in widescreen, and you didn’t even use the word “pregnant” (or at least the French equivalent) or reference obvious sex and nudity (merci, Roger Vadim) or indulge in gratuitous shooting and parkour (thanks, Luc Besson).

I think it’s not a parody…but it’s about as retro as you can get and still keep a straight face. Director and star is Daniel Auteuil, an eminent French thespian whom I guess I could compare with America’s now-retired Gene Hackman in terms of versatility and ability to move easily from one genre to another. But Auteuil came to international renown in a grand Pagnol remake, 1987’s JEAN DE FLORETTE, so perhaps this is his own salute. Auteuil plays Pascal, a humble well-digger in early 1900s France, widows but with six daughters and a brotherly relationship with fellow laborer Felipe. Pascal’s favorite daughter is the eldest, Patricia, who received a “posh” Paris education, at least for a short time, and represents the peasant family’s hopes for marrying up in the world.

But instead Patricia has a fling with a bad-boy suitor, the dashing aviator son of the village’s wealthy shopkeeper and his snobbish wife. That act leaves the girl “in trouble.” Bachelor Felipe heroically offers to marry Patricia himself and avoid scandal, but Pascal determines to preserve the family honor and ask the shopkeeper to arrange a rightful union to give the baby its proper father. And if the other household doesn’t agree, Pascal will have no alternative but to disown Patricia and send her into exile. In the Pagnol/Auteuil context, this comes off as not so much small-minded and cruel as much as the father just acting out the values of the times, as one of nature’s noblemen.

And, as a special bonus complication, Patricia’s lover has gone off to be a fighter pilot in World War One and disappeared, so there. Be assured, though, that all ends happily, with just about every lovesick character paired up with their true heart’s desire and everything but a wedding-party walk into the sunset as the rooster emblem of Pathe crows.

It’s a nice, tranquil bit of melodrama, and I must confess to not having seen the original so I cannot make a direct comparison. Was Auteuil’s tongue firmly in cheek, or did the French star respectfully render this corn for our ultra-cynical age? Oh well, it’s an “art-house” French picture for the type of audience that likes to collect Thomas Kinckade paintings for the living room, and who am I to say that’s so wrong? (2 3/4 out of 4 stars)