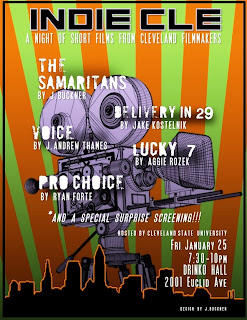 A night of short films from some of the best up-and-coming Cleveland Filmmakers
Where: Drinko Performance Hall 2001 Euclid Ave. (located in the Music and Comm Bldg @ CSU)
When: Friday January 25th 7:30-10pm
This is a FREE Event!
Order of films is TBD

Films showing include:
The Samaritans
Directed by J Buckner
A young couple enjoying a quiet morning in the park is faced with a difficult situation when a hysterical man asks for their help.

Pro Choice
Directed by Ryan Forte
Two hillbilly brothers, Jesse and Wyatt, work for a gangster. They are assigned the task of keeping their boss’s girlfriend hostage. The boss plans on killing her, but when Wyatt falls in love with her, Jesse is left with the difficult decision to stick with his brother or stay loyal to the boss.

Delivery in 29
Directed by Jake Kostelnik
Based on actual events, Delivery In 29 comically explores the lives of two young men working as pizza delivery drivers in Cleveland.

Voice
Directed by J Andrew Thames
A young protester who experiences a throat injury must search for his new voice, which he finds in graffiti.

**And a special surprise screening of a much anticipated locally made short film.
Posted by Bob Ignizio at 12:00 AM