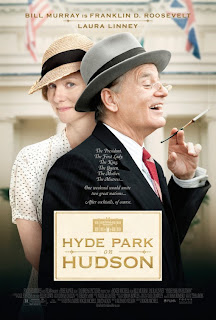 After Steven Spielberg’s worshipful LINCOLN, it should be refreshing to see a presidential biopic that doesn’t overlook its subject’s flaws. HYDE PARK ON HUDSON takes an unflinching view of President Franklin Delano Roosevelt, showing his withered legs, his need to be carried bodily by strong attendants, and the frustration beneath his familiar bonhomie over his handicap. It also highlights his marital infidelity. Who’d have thought a film about presidential philandering would focus on the discreet affairs of the crippled FDR rather than the brazen, compulsive womanizing of John F. Kennedy?

As refreshing as this honesty is, it’s uncomfortable watching the 32nd president, impersonated here by Bill Murray, jiggling in his shiny convertible as he receives a hand job from his fifth cousin, Daisy (Laura Linney). That scene is bookended by a later one in which Daisy, at the behest of her presidential lover, smears mustard on a hot dog held by England's King George VI (Samuel West), a presumably unintended hint of eroticism that underscores her role as FDR's concubine.


Daisy is based on FDR cousin Margaret Suckley, who reportedly had a long-term affair with the president that was revealed by letters and diaries found after her death. Daisy narrates the film, recounting how she came to be the president's confidante and mistress, one of several women who gave Roosevelt companionship and solace while his wife, Eleanor, kept separate lodgings with her friend Lorena Hickok ("Hick").

Director Roger Michell (NOTTING HILL, MORNING GLORY, VENUS), insisted on the unlikely casting of Murray, who delivers a subtle but uninspiring performance, lilting the patrician accent and wielding the famous cigarette holder without stooping to caricature. Overcoming the banality of Richard Nelson's script, however, is a task beyond Murray or any of the movie's other capable actors. Capturing FDR's ebullient personality requires wit and imagination, two things Nelson seems to lack. Oliver Wendell Holmes once said Roosevelt had a “second-class intellect but a first-class temperament” — his magnetic personality was key to his political success. Nelson provides FDR with folksy anecdotes and good-natured complaints about his domineering mother and disapproving wife, but the dialogue lacks the necessary sparkle.

Take FDR's seduction of Daisy. After summoning her from her ramshackle Duchess County, NY home, where she cares for an aged aunt, the president shows Daisy his stamp collection. Not once but several times, he invites her to admire his album of international stamps. “This is the tallest waterfall in the world,” he raves about one specimen, sounding more like a boring, senile granddad than the president famous for his charisma.

The story centers around the 1939 visit of King George VI and Queen Elizabeth to Roosevelt’s Hyde Park, NY estate in an effort to secure support for the war, would be fertile ground for a clever comedy of manners, focusing on the culture clash between the proper monarchs and the often too-casual Roosevelts. (The real Eleanor, who had little interest in cuisine, was known to serve meager meals, to the despair of the epicurean Franklin).

Alas, it is not to be. Nelson’s fatuous script imagines the Queen (Olivia Colman) berating her royal husband, Bertie, for stammering and for not acting more like his brother, the ex-king Edward —two things the actual Elizabeth is unlikely to have done (she resented Edward for abdicating and loathed “that woman,” Wallis Simpson). The script also has the royal couple flummoxed (Bertie) and indignant (Elizabeth) that the Roosevelts plan to serve hot dogs at a picnic. I lost count of the times Elizabeth haughtily pronounced the phrase “hot…dogs,” as though the Roosevelts were serving horse droppings. A less literal-minded writer would surely have invented better dialogue for a late-night meeting between the King and the President than to have Bertie lament, “This goddamn stutter!” and Roosevelt respond cheerfully, “This goddamn polio!” That writer also would probably not have FDR’s mistress-cousin, feeling spurned for a more senior paramour, confronting Roosevelt: “Am I like a whore?”

The settings and costumes establish a convincing sense of time and place, and there is a mildly amusing turn by Elizabeth Wilson as Franklin’s stern mother and an unusually attractive masculine-suffragist version of Eleanor (Olivia Williams). The tumultuous events of the time are addressed superficially, but history is not the movie’s focus. HYDE PARK is one of those “I Rubbed Shoulders (or some body part) with Fame” stories, like ME AND ORSON WELLES or MY WEEKEND WITH MARILYN — only with a U.S. president instead of a Hollywood celebrity. While the film aims to be whimsical, it’s actually distasteful — not to mention trivial, given the time period it depicts.  (An epilogue states cornily that Britain and the U.S. fought "shoulder to shoulder" in the war. See Oliver Stone and Peter Kuznick's THE UNTOLD HISTORY OF THE UNITED STATES for alternative enlightenment). They were serious times, and yet here's a film more interested in presidential hand jobs than in the gathering storm of World War II.