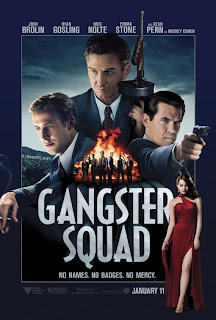 Going into GANGSTER SQUAD, I was worried that my almost total lack of knowledge surrounding famed Brooklyn mobster Mickey Cohen and his bloody westward pilgrimage that placed 1940s Los Angeles under mob control might temper the viewing experience. Luckily, I could’ve missed every second gunfight and still kept up.

Ruben Fleischer’s (ZOMBIELAND) slick, gaudy shoot ‘em up is a huge, dumb, violent pulp comic of a film. Anyone eager for the dark intricacies and moral culs de sac of L.A. CONFIDENTIAL will find themselves hemorrhaging more expectation than the baddies do blood. Set your sights on SIN CITY, minus the personality, or DICK TRACY with a digital sheen (come to think of it, Sean Penn’s squinty, snarling Cohen would look right at home between Flattop and Mumbles).

Mauled from the pages history (and Paul Lieberman’s book Tales From The Gangster Squad), the film follows its titular cadre of nails-tough, misfit cops, led by the gold-hearted, broad-shouldered Sgt. John O’Mara (Josh Brolin), as they go slug for slug with Cohen’s gang.

Forced to perform audacious, mob-style sabotage to avoid being pegged as the fuzz, O’Mara and his team, including jazz-bar drug-buster Rocky Washington (THE HURT LOCKER’s Anthony Mackie), brainy Conway Keeler (TED’s Giovanni Ribisi), and pistol-slingin’ Max Kennard (T2’s Robert Patrick), resort to increasingly risky measures, from grenade-hurling car chases to full-on public Tommy gun mayhem, in hopes of freeing the City of Angels from the mob’s stranglehold. Ryan Gosling (DRIVE), meanwhile, plays Sgt. Jerry Wooster, a drunken cop who’s drifted from the cause only to be pulled into the SQUAD after finding himself enchanted by Cohen’s special lady friend, Grace Faraday (THE HELP’s Emma Stone).

I’ve already perused several articles that have taken Penn to task for his casually vitriolic portrayal of Cohen, a Mafia caricature who spends the film sneering, swearing, and ordering one hit after another. But criticism of Penn’s performance hinges on the existence of some phantom missed opportunity for nuance. In reality, screenwriter Will Beall’s (ABC's Castle) Cohen is a one-dimensional moral void, and Sgt. O’Mara: pure white light. Ignore the fedoras, booze and slinky dresses – this is not noir. It’s straight-up cops and robbers. Pulp-stock good and evil less interested in moral gray than fluid red and combusted orange. Good guys vs. bad guys. Viscera and shrapnel.

To that ends, some of the cornier thematic beats actually play well. Early on, Cohen, reveling in his Californian monopoly, snarls out a heavy-handed monologue about manifest destiny and the pioneers journeying west - it’s the leaden sort of metaphorical jawing that can only be buoyed by the floating speech bubbles of comic books… And lo, a later scene actually finds O’Mara’s wife Connie (The Killing’s Mirielle Enos) enthusiastically brandishing an issue of True Detective. Whether it’s an intentional nod to the film’s over-the-top tone, an implicit justification of the way in which the movie coaxes a historical narrative into an exaggerated fiction, or sheer, unintentional irony, who’s to say?

Someone arguing for the latter could point out several other character speeches that pretend a thematic depth that simply isn’t present. After a horse-load of happy killings, for example, Keeler desperately questions what separates the methods of the SQUAD from those of the GANGSTERs they so dutifully ice. It’s not an original quandary to begin with, but has absolutely  no place in a film that doesn't so much as pretend the mobsters are anything more substantive than clay pigeons in fitted suits.

Even as pulp storytelling goes, SQUAD ain't a master’s class – it’s correspondence school, at best. The plot is boilerplate, the characters'  idiosyncracies are easy and bland, and the dialogue is only snappy in fractured soundbytes, which helps it from feeling too exaggerated, but also keeps it from being consistently fun. Also, rejoicing though it does in its “serious” violence, the film’s sense of humor is frothy and contemporary – cringing slapstick and summer-Blockbuster one-liners that don’t leverage any of the film’s topical darkness.

None of that would pose huge problems if the movie offered some compelling drama. But this, too, feels half-hearted, with characters relationships thin and wispy as gunsmoke, and a sprinting pace that’s afraid to take full breaths between setpieces.

GANGSTER SQUAD is a product of the conflict between fiction and history, and, as such, is left partially hobbled by the storytellers' inability to confidently manage their loyalty to the past amid their affection for a wild romanticism thereof. Still, that it ultimately loses itself in pure adolescent fantasy, rather than become mired in reprocessed, overwrought reality like, say, DePalma’s nigh unwatchable BLACK DAHLIA, makes it a worthy single-serving flick. Certainly both BLACK DAHLIA and GANGSTER SQUAD could be described as disposable, but at least I enjoyed watching SQUAD before pitching it to the back of my mind. (2 1/2 out 4 Stars)