[DJANGO screens Tuesday January 22nd at 7:00 pm at the Capitol Theatre in cooperation with the Cleveland Cinematheque.] 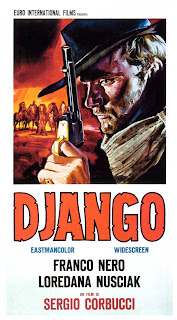 If imitation really is the sincerest form of flattery, then Italian filmmakers in the nineteen sixties, seventies, and early eighties must be among the most prolific dispensers of compliments in human history. Throughout those decades, pretty much any film that turned a profit quickly spawned at least a dozen low budget knock-offs. Often it was American product that would kickstart these trends, but one notable exception was the Italian film A FISTFUL OF DOLLARS, directed by Sergio Leone and starring Clint Eastwood, that would give birth to countless “spaghetti westerns”.

One of the earliest and best films to follow in Leone's footsteps was Sergio Corbucci's DJANGO, which as could sometimes be the case with these kind of rip-off films, actually wound up bringing enough new elements to the table to wind up a minor classic itself. The success of DJANGO in turn led to even more films using the Django name,whether there was any actual connection to the original film or not. These rip-offs of a rip-off eventually culminated in Quentin Tarantino's DJANGO UNCHAINED, which also stole DJANGO's super catchy theme song and is probably the main reason most people are even bothering to read this review.

The plot of DJANGO involves the titular character, a former Union solider played by Franco Nero, looking to get revenge on a Confederate officer named Jackson (Eduardo Fajardo) responsible for the death of his wife. Although he does have a name, Django is essentially a variation on Clint Eastwood's “man with no name” from FISTFUL and its follow-ups, a stoic antihero who does good only as a byproduct of his personal quest for vengeance. What Corbucci adds to the mix is a greater level of violence and the iconic visual gimmick of Django dragging around a coffin containing a Gatling gun. It's also notable that the morality in DJANGO is even murkier than in FISTFUL, represented visually by the incredibly muddy town that provides the setting for much of the action.

Like most Italian films of the time, DJANGO was shot without sound and dubbed in post production for the various territories it was sold to. So while the Cinematheque and Capitol Theatre are showing the film in Italian with English subtitles, this is no more the “true” version of the film than its English dub. Personally I find the English spoken dialogue to play better than the subtitles provided for the Italian version, but either way this is still a highly entertaining, and extremely violent film. 3 out of 4 stars.