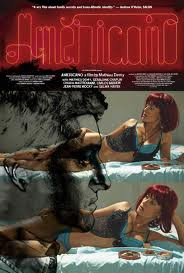 I've got a theory about Salma Hayek's body. Well, lots of males have theories about Salma Hayek's body, but mine has redeeming social value, I think, maybe. You know how in just about every movie the actress does, she has a gratuitous strip-club scene, right? Of course, I didn't see FRIDA, and I think she did a few CGI kiddie-picture or Muppet voiceovers. But usually Salma Hayek likely means: strip scene, or something pretty close.

Now, the recently re-inaugurated Barack Obama won the presidency, I understand, largely via a groundswell of Hispanic voters. It's well known that Latinos are a powerful political bloc. So here's my theory: Salma Hayek and her gratuitous strip-club scenes are a Democrat-sellout plot to soften the American people for more immigration. She's Mexican, right? Enough strip scenes might embed the idea in viewers that all undocumenteds coming across the Rio Grande look like her. I mean, yes, stealing our jobs and all that...but who cares? THEY LOOK LIKE SALMA HAYEK! Remember her taking her clothes off in FROM DUSK TILL DAWN? Or in a lesbian clinch in TIME CODE? Doesn't the Constitution talk about the Pursuit of Happiness, or something? If up to a million Salmas or thereabouts appearing in our midsts isn't happiness, what is? Okay, border guards can now stand down...

If you are a female reading this (yes, as if anyone reads this), substitute Diego Luna or Gabriel Garcia Bernal; it's all good.

Salma Hayek's curves are generously displayed on the video box of AMERICANO in a way that would easily cede California or Texas back to La Reza. Yet it gives a rather misleading vibe to writer-director Mathieu Demy's debut - not a retro-90s direct-to-DVD "steamy erotic thriller," but rather a bluesy exile-drama sort of thing, in which the filmmaker himself takes the lead role (and isn't bad), as Martin. He's a disaffected young Frenchman with dual US citizenship and an pretty dull-looking love life with some girl with whom her barely speaks (girls might conceivably speak to you? Wow, I wish I'd known that when I was this protag's age).

Upon the death of his long-estranged mother in Los Angeles, Martin goes to the United States, to get his inheritance and take care of the estate. From years and years of hearing his father complain, Martin has formed a picture of his mother as somebody who never cared much for him or anyone else besides herself. Thus he is surprised to learn his mother was close to Lola, a young neighbor Martin recalls dimly as a childhood playmate. The dead woman wanted to bequeath Lola her apartment and possessions.

Martin is not offended at the beyond-the-grave snub, but rather intrigued. He follows Lola's trail to Tijuana, where it leads to a cynical stripper-prostitute (Hayek), who resists sharing information about the dead woman. The more he is rebuffed, however, the more wrapped up Martin becomes about Lola. He returns obsessively to the strip club, seeking clues, seriocomically losing just about all his possessions in a sort of undergrad sex-tourism nightmare, and realizing he may have been mistaken about his childhood, his mom, and the circumstances under which his family fell apart.

Yes, even accessorized with a facial scar (which, we come to understand is the strip-club owner's mark as his human property), Hayek, when she does a knee-weakening exotic dance in a transparent fishnet body suit, proves the inheritor of the Sophia Loren/Marilyn Monroe quality of being able to act almost as good as she looks. Since sexual allure and naked lust really isn't the point of the drama - more of a red herring, if anything, in Demy's script - the overall vibe of the material is melancholy among the hotties. There are polished production values and a cast of familiar faces, some of whom happen to be second-generation movie royalty (Geraldine Chaplin, Chiara Mastroianni), synergizing with the asterisk that Mathieu Demy is himself the son of married French cinema greats, directors Agnes Varda and the late Jacques Demy. Now there's a household that probably had other things to talk about over the dinner table than the Superbowl and the Heisman.

So, an impressive hyphenate-filmmaker debut, a solid drama, though it's a tough call whether Salma's superstructure distracts you from the emoting or not. Don't be too surprised before long if you get to click *here* for Spanish translation of this review. Penelope Cruz and Javier Bardem are working to propagandize for that one. (2 3/4 out of four stars)
Posted by Charles Cassady Jr. at 12:00 AM