Wake in Fright (December 6th and 9th at the Cleveland Cinematheque)

[WAKE IN FRIGHT screens Thursday December 6th at 8:45 pm and Sunday December 9th at 6:30 pm at the Cleveland Cinematheque.] 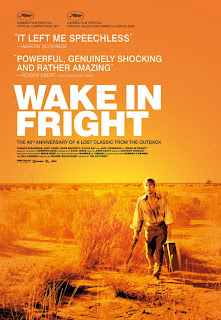 It's Christmas break, and Australian schoolteacher John Grant (Gary Bond) has plans to visit his girlfriend in Sydney in the once thought lost Austrailian thriller WAKE IN FRIGHT. John is essentially an indentured servant, having signed a $1000 bond in order to get his teaching degree. His end of the bargain is that he has to go where he's sent and stay there until he pays his debt, in this case the tiny outback town of Tiboonda, a posting the young pedagogue clearly feels is beneath him.

Before John can get to Sydney, his train has to make a stopover in the mining town of Bundanyabba, which the locals all refer to as “The Yabba”. Here John is confronted with the horrors of working class Australian manhood, people he views as a bunch of sweaty, dirty, beer drinking slobs. Even the friendliness of these people gets on John's nerves, but after he loses all his money gambling John finds he has no choice but to depend on the kindness of strangers.

Eventually John winds up staying with the town's alcoholic Doctor, “Doc” Tydon (Donald Pleasance). Tydon lives completely off the grid and without money, offering his medical services free of charge to customers who don't mind that he's usually drunk in return for food and beer. John spends an alcohol fueled lost weekend with the doctor, during which he must come to terms with his own animalistic side and the realization that he isn't any better than these people he looks down on. It's a truth he may not be able to accept.

Made in 1971, the pacing may seem a bit slow for modern tastes, but that just allows viewers to soak up all the sordid details of life in the outback. Perhaps the most notorious of these details is a scene in which Grant goes kangaroo hunting with the Doc and two of his friends. Some of the footage we see is from a real kangaroo hunt, which may be disturbing to some viewers.

In some ways, WAKE IN FRIGHT is kind of like an Australian version of DELIVERANCE. Certainly the residents of “The Yabba” are outback stereotypes, and the film plays on the fears sophisticated city folk have of those they perceive as being beneath them. What keeps the film from being the down-under equivalent of American “hicksploitation” films is the way it breaks its protagonist down until there's no difference between him and the feared “other”. The real fear is in recognizing that we really are all the same, and that we'rekind of savage and brutal beneath the veneer of civilization. 4 out of 4 stars.