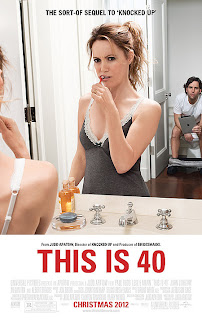 If this is 40, Judd Apatow, give me 37. Or 65 and a half. Just don't let me be the age at which you're a spoiled, affluent suburban couple screaming and whining about Viagra, hemorrhoids and mortgage payments while driving your deluxe BMW and cavorting at a pricey resort.

That the same Judd Apatow who gave us brilliant episodes of The Larry Sanders Show in the '90s and the endlessly hilarious KNOCKED UP is responsible for the unendurable THIS IS 40 is both baffling and depressing. Either Apatow never was as clever as we thought, or more likely, success – as a writer, director and head of his own production company – has compromised his talent. According to a recent New York Times profile of Apatow, THIS IS 40, about the travails of middle-aged marrieds and featuring his real-life wife and children, is semi-autobiographical. If that's so, Apatow must live the shallowest life imaginable. In tackling this subject matter, Apatow doesn't need to be Cassavetes or Bergman – he just has to be funny. THIS IS 40 is sour, strident and decidedly unfunny.

Apatow's signature, which has filtered down through his many productions and their descendants directed by others (including FORGETTING SARAH MARSHALL, THE FIVE YEAR ENGAGEMENT, I LOVE YOU MAN, BRIDESMAIDS) is the offhand, improv-style conversation, a technique that at its best – in KNOCKED UP -- is hilarious. (I am so fond of this style I even coined an adjective, “Apatovian,” for it.) There are multiple attempts to wring laughs out of this technique in THIS IS 40, involving gifted comic actors Albert Brooks, Melissa McCarthy and Jason Segel, and all of them fall flat.

Apatow's primary subject is young adult males who refuse to grow up and are forced by the women in their lives to grow up. Seth Rogen in Knocked Up, after impregnating one-night stand Katherine Hegel, is forced to give up his shiftless stoner lifestyle and be a dad; Nerdy Steve Carell in The 40 Year Old Virgin must become an adult after meeting eligible middle-aged Catherine Keener. The heart of the comedies, though, is male friendship. In part, that is why THIS IS 40, a two-hander about the intimacies of married life, doesn't work. Apatow is a successful family man, but onscreen, he doesn't do male-female relationships particularly well.

THIS IS 40 centers on minor characters from KNOCKED UP, Pete and Debbie, played by Apatow alter ego Paul Rudd (in a hairstyle that makes him look like The Three Stooges' Shemp) and Apatow's wife, the appealing Leslie Mann. KNOCKED UP found Pete complaining about the responsibilities of married life and hiding his secret hobby (fantasy baseball) from his wife. In THIS IS 40, he's still evading responsibility, hiding from his wife and two daughters by sitting on the toilet playing Bejeweled Blitz on his iPad  -- thereby embodying two of the movie's dreary obsessions: modern electronic gadgets, and anuses.

Pete and Debbie are both turning 40, though only Pete will admit to it; as the movie opens, the couple are having birthday sex in the shower, and Debbie, on discovering that Pete used Viagra, screams at him. Debbie has a deep fear of aging. She works out her taut body relentlessly with her personal trainer (Jason Segel), who reassures her that if she were his girlfriend, he wouldn't need Viagra (“You give me a boner!” is the movie's idea of hilarity.) The couple have two daughters, Sadie and Charlotte, played by the young Apatows, Maude and Iris. The daughters were also featured in KNOCKED UP and FUNNY PEOPLE. THIS IS 40 allows the older girl, Maude, the spotlight, giving her several emotional speeches that demonstrate her seriously limited acting ability.

The couple are dealing with financial problems resulting from Pete's decision to leave a comfortable job with Sony to start his own record label, where he can produce recordings by the bands he worshiped in his youth. (They nonetheless spend quite freely.) Currently, Pete is heavily invested in a reunion of the (boring and superannuated) Graham Parker and the Rumour, and won't take his wife's advice to sign a hot teenage girl singer “so we can eat.” The failing record venture, along with the $80,000 he's lent his endlessly mooching divorced dad (Albert Brooks), may force the couple to sell their massive home – a fact Pete is concealing from Debbie.

Debbie owns a clothing boutique where seems to show up infrequently, enough only to notice that one of her employees – either vampy, slutty Megan Fox or mousy Charlyne Yi – has stolen $12,000. This is one of numerous subplots (there's also one about Pete's dad's unlikely second family of young triplet boys) that lead nowhere, or at least nowhere funny. The couple also must deal with their daughters' Apple-induced electronic fixations – the older daughter is hooked on episodes of Lost (not funny), and her texts and Facebook conversations with a boy raise Debbie's concerns. At one point, Debbie confronts and threatens to “fuck up” the boy she thinks insulted her daughter, leading to an also-not-funny confrontation with the boy's mother (Melissa McCarthy, who does what she can with the anemic script).

On and on it goes, without any particular direction and with a lot of screaming and pointless vulgarity along the way. The movie's nadir might be when Pete, naked and legs aloft, tries to enlist Debbie in examining his rectum for hemorrhoids. Debbie's amusingly arch response (“Can we preserve just one shred of mystery?”) can't redeem the awfulness of this scene, which depicts something done by no couple, ever.

And that's a problem for this movie. Whereas there are moments that are recognizably realistic – the daughters' endless bickering, Debbie's frosty relationship with her estranged father (John Lithgow) – most of the movie is trivial and annoying. Wealthy people whining about money, presented without ironic distance, is not exactly moving, and without the leavening of good jokes, it's a long, screechy disaster.

We expected far more from our erstwhile hero. To borrow from the musical Oklahoma, “Poor Judd is (Creatively) Dead.” 1 1/2 out of 4 stars.

(For another take on this film, read Matt Finley's review here.}