[THE POINT is now available on home video.] 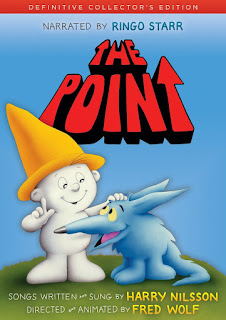 It’s been forty years, but Oblio has finally returned from The Pointless Forest.


Available now from MVD Visual, THE POINT:  DEFINITIVE EDITION recaptures the wonder of Harry Nilsson’s animated fable for a new generation—and the timing couldn’t be better.


Sprung from the mind of one of pop music’s quirkiest creators, THE POINT tells the story of Oblio, a round-headed boy living in a land where everything—and everyone—has a point.  When Oblio and his trusty blue dog Arrow get on The Count’s bad side, the benevolent old King is forced to follow the letter of the law and banish them as "involuntary outlaws."


But Oblio comes to find that points are like opinions, and you know what they say about opinions.  The has points aplenty, on treetops and pterodactyls, paths and promontories.  Even characters without triangular noggins (like the dancing fat sisters) have a method to their madness.  Which is to say, they’ve got points, too.  The ultra-hip Rock Man informs Oblio he needn’t have a point on his skull to have one in mind, and industrious Leaf Man imparts lessons not unlike those memorialized in The Byrds’ bible-based hit, “Turn, Turn, Turn.”


In fact, just about the only creature in The Pointless Forest without an actual point is the three-headed   Sure, his body sprouts arrows in all directions and his six hands jab fingers every which way, but—as Oblio realizes—he speaks in circles.


The Count learns a lesson of his own when Oblio’s adventure concludes back home, where the people of welcome the brainy boy with open arms and repudiate the law that sent him packing.


It’s a charming, terrific, even pointed parable for an age wherein ostracism itself is outlawed, Hate Crimes are particularly heinous, and tolerance is enforced within the boundaries of ubiquitous No Bully Zones.  It’s never been less cool to dismiss people for nonconforming or insult others for inherent traits.  Produced in an era when race relations were still tense, the conflict was on full boil, and the American government was hoodwinking the public and lying about it, THE POINT advocated acceptance and open-mindedness as an ABC Movie of the Week in February 1971.  The message is just as potent for kids and parents today.


Nilsson began writing songs for fun (and extra income) while working as a bank clerk in the Sixties; Three Dog Night topped the Billboard charts with his earnest ballad, “One.”  Blessed with a three-octave range and uncanny sense of melody, he scored a hit with the Fred Neil-penned “Everybody’s Talkin’” (from MIDNIGHT COWBOY).  Nilsson’s singing and songwriting struck a chord with The Beatles and Monkees, whose members starting hanging with Harry in hopes a little of his magic might rub off.


Nilsson died in 1994, but his quirky tunes (“Coconut”) and stratospheric interpretations of others' material (Badfinger’s “Without You”) still resonate today.


Harry conjured THE POINT earlier in his career—months before the critically-acclaimed Nilsson Schmilsson earned him a second Grammy.  Determined to get his children’s green-lighted, he cornered producer Jimmy Murakami on an airplane and pitched his project.  Fred Wolf took on illustrator and director duties while Harry wrote up a batch of tunes befitting Oblio’s trippy, WIZARD OF OZ-like quest.  “Me and My Arrow” and “Are You Sleeping?” were breakout hits, but “Poli High,” “POV Waltz,” and “Lifeline” also pluck the heartstrings.  Even the Nilsson non-initiated will remember the silly circle-of-life song “Think About Your Troubles (The Bubble Song).”


Wolf’s graphics are a blend of simple strokes (Charles Schultz’s Peanuts) and psychedelic motifs (The Beatles’ YELLOW SUBMARINE).  The colors are watery but vivid, the motion mildly choppy—but quaintly unhurried by today’s CG-assisted, manga-dominated standards.  The townspeople (including Oblio’s distressed parents) are predominantly orange, with villains inked in purple and Oblio and the King rendered in neutral white.  Pointed Man and Rock Man are still fascinating to see and hear; their dialogue will tickle youngsters’ ears as much as their outward appearances dazzle the eyes.


And oh yeah, Ringo Starr is the narrator.


The film clocks in at 75 minutes, lending itself to convenient pre-bedtime viewing for kiddies or a Saturday afternoon sofa matinee.  The bonus features tack on another 25 minutes, including a Nilsson profile and interviews with artist Fred Wolf and Harry’s attorney pal Lee Blackman.  But junior can skip those.  3 out of 4 stars.