The Motorcycle Diaries (December 29th. at the Cleveland Museum of Art) 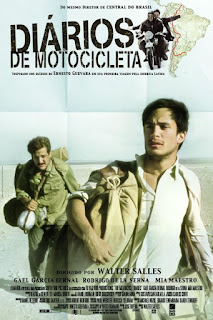 “This is not a story of heroic feats,” goes the bookending narration at the beginning and end of THE MOTORCYCLE DIARIES, accurately. The drama follows a real-life 1952 road trip by two young Argentineans across South America. One of them, Ernesto Guevara de la Serna, will later become a Communist revolutionary, Fidel Castro cohort and icon on countless American college dorm walls (by now, probably college administration offices) nicknamed `Che.’

`Che’ Guevara died in 1967, executed by the Bolivian authorities he was attempting to overthrow with a guerrilla squad. On the left end of the political spectrum he’s become a romantic-hero figure, like a cross between Davey Crockett and Nathan Hale. Even as Communist regimes collapsed the 1990s (Castro’s Cuba a major exception), Guevera remains a hero - maybe because he perished before his memory could be associated with gulags, government torture and boat-people refugees. And/or because he died leading the foot-soldiers, not calling the shots from the safety of a distant fortress like practically any other statesman.

In any case, THE MOTORCYCLE DIARIES arrived on the level of such before-they-were-famous Hollywood historic pieces as YOUNG MISTER LINCOLN with Henry Fonda, or YOUNG TOM EDISON with Mickey Rooney. It stars some of the top Latin-American actors and lists Robert Redford as the executive producer. Ernesto (Gael Garcia Bernal) is a 23-year-old medical student from a privileged background in Buenos Aries who joins pal Alberto (Rodrigo de la Serna) for a four-month, self-guided tour of  South America. Their aim: celebrate Alberto’s 30th birthday and give Ernesto some time with his girlfriend. They ride on Alberto’s treasured but unreliable 1939 motorbike. In Chile the vehicle conks out for good, and Ernesto’s girlfriend breaks up with him via letter.

The pair now hike overland, finding shelter and trying to keep to their itinerary, which ends with a humanitarian visit to a leprosy clinic related to their medical studies. Along the way are little incidents in which the pair witness injustice, usually against the native Indians, the poor, or anyone opposing corporations, the Catholic church (“Jesus Christ Incorporated”), or landowners. Fun-loving Alberto, in fact, is more into scamming and chasing girls to be concerned with social conditions. An epilogue explains, however, that his trip with the future Che changed Alberto’s life forever, and THE MOTORCYCLE DIARIES is based closely on both his memoirs and the journal that Guevara kept.

This is a very subtle, realistic film - Marxism and the United States are barely mentioned at all - rather than a propagandistic rant (AM talk-radio hosts could learn a trick or two...on the other hand, no, no they couldn't). Indeed, if these were two fictional characters you’d think it was just a well-acted, rather shapeless road-movie about friendship and Latin America in the 1950s. The moviemakers certainly find Ernesto deeply admirable all along. Unlike Alberto, Ernesto tells the truth even when it hurts, and shows innate compassion for the downtrodden. And who could argue with that? Well, many Americans who regard Che and his comrades as terrorists, for one. When it came out, critics of THE MOTORCYCLE DIARIES compared the Communists to the Nazis, and pointed out there sure haven’t been any movies idolizing nice young  guys who happened to be Nazis – conveniently forgetting that actually, there were a few: SEVEN YEARS IN TIBET, with Brad Pitt, and VALKYRIE, with Tom Cruise.

The adage “One man’s terrorist is another man’s freedom fighter” really applies here, and it may or may not enhance one’s admiration for THE MOTORCYCLE DIARIES that I am given to understand, unless I’ve been badly lied to by the right wingers (nawww, they do that? Really?) that during the Cuban Missile Crisis the former medical student Che passionately wanted Castro to launch all those Russian nuclear rockets at America, causing countless casualties in an inconceivable atomic holocaust across the USA. Oh well, nobody’s perfect. Even had that gone down, I still visualize girls (some with three eyes or likewise mutations) swooning in front of the Che shrines, posters, mugs and T-shirts festooning the faculty lounges on American college campuses outside the thousand-year fallout zones.  (2 3/4 out of 4 stars)

Posted by Charles Cassady Jr. at 9:08 AM