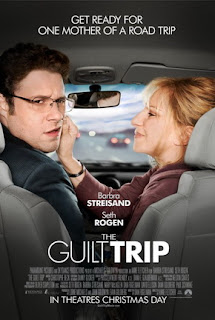 THE GUILT TRIP tweaks the formula by setting salesman Andy Brewster (Seth Rogan) on a cross-country drive in a cramped car with his overbearing single middle-aged mother, Joyce (Barbara Streisand).  Organic chemist Andy must pitch the biodegradable cleaning agent he’s invented to wholesalers in several major markets from to  He funded the project with his father's inheritance, so he’s determined to hide his lack of success from his proud mother.

Joyce—an archetypal doting but meddlesome, loquacious,  budget-minded Jewish mom who refills Evian bottles with tap water—is less concerned with her only child’s career than his love life and relentlessly quizzes bachelor Andy about why he broke up with this-or-that girl.  Andy sighs and rolls his eyes, brushing off talk of his college paramour.  But after learning that Joyce’s high school sweetheart is alive and well (and single) in , he decides to play matchmaker and invites mom on his trip in hopes of reuniting the storybook couple at the end of his journey.

The “beats” along the way are familiar.  We know going in that Andy and Joyce will rattle each others’ nerves until the inevitable fall-out, when the gloves come off and pressure points get pushed.  We're also confident they’ll find a way to patch things up.  The trick is how well writer Dan Fogelman (TANGLED, CARS) and director Anne Fletcher (STEP UP, 27 DRESSES) pull it off, and how they distinguish their car quest from other contemporary Tinseltown travelogues.

Rogen (KNOCKED UP, GREEN HORNET) and Streisand (A STAR IS BORN, PRINCE OF TIDES) have a natural chemistry and slip into the automotive Oedipal odyssey with comfortable conversation, banter, and back-talk.  Joyce tortures Andy on the ride with a twelve-CD audiobook of Jeffrey Eugenides’ hermaphrodite tale MIDDLESEX and keeps him up nights in hotels by munching M&Ms in bed.  The pair brave snowstorms and steakhouses  and are accosted and / or embarrassed by strippers, ex-girlfriends, and cowboy suitors along the way.  Andy repeatedly rebuffs Joyce’s advice on modifying his sales pitch, but he can’t seem to move the 10,000 units of cleanser on his own.

The perpetually razor-stubbled Rogen is believable as the flummoxed man-child trying to please mum without compromising his independence.  He tolerates Joyce’s frequent (and untimely) phone calls and accommodates her coupon-savvy quirkiness while safeguarding his personal life with curt responses or—as needed—gruff dismissals.

But it’s hard not to sympathize with (and adore) Streisand’s emotionally complex widow.  Having lost her husband twenty years ago and seen her son off into the world, Joyce has feathered her empty nest with frog tchotchkes, purse hooks, and coffee shop chatter.  Like her M&Ms, a soft inside lay beneath the crunchy shell.  She’s desperate for affirmation that she meant something to someone who meant so much to her.  It’s up to Andy to “melt” mom, dial down her brusqueness, and empower her to reengage romance.  It wouldn’t kill him to practice a little of what she’s preaching, either.

GUILT TRIP is amusing without being raunchy (a la HANGOVER, KNOCKED UP).  We expected a comedy peppered with drug and sex jokes at every turn but were surprised by the film’s warm ‘n fuzzy charm.  The aw-shucks twist ending puts a lump in the throat even if the screenplay doesn’t quite earn it.  There trip has zero momentum until Andy and Joyce hit the highway, and even then the narrative is halted by one or two unnecessary roadside stops and overlong incursions.  Fletcher seems aware of this, however, and wisely limits the flick to an endurable 95 minutes.

Funny girl Streisand’s salary was probably underwritten by the many real-life corporations Andy solicits along the way with his FDA-approved coconut-and-soy based cleanser:  K Mart, Cosco, and Home Shopping Network enjoy large chunks of screen time.  Other product placements include McDonald’s and Mars candy (Joyce’s M&Ms).  Given the nature of Andy’s work, however, the appearances don’t feel too contrived; they fit snugly within the framework of his itinerary, and thus the story.

Andy and Joyce each have a night of drunken emotional venting, but sex references are restricted to an accidental stop at a topless joint (no nudity) and a speed-dating event for mature singles (no casualties).  A heated argument, one F-bomb and three instances of shit and goddamn earn the picture’s PG-13 rating.

Christophe Beck’s score neither amplifies nor impedes the action, which is to say the Canadian composer’s work here—like that in AMERICAN WEDDING and CHEAPER BY THE DOZEN—is benign ear pap.  Songs by Black Keys, Scissor Sisters, and Warrant more effectively set the scenes and moods.