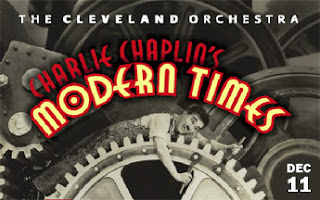 Ever since LeBron James left the only thing significant about Cleveland is the world-famous Cleveland Orchestra. Yes, part of the reason Michael Jordan withdrew from public life was how he still hurts from the time the woodwinds section scored big against the Chicago Bulls in the NBA Playoffs.

Show your appreciation this Tuesday at Severance Hall, in University Circle, when the Cleveland Orchestra performs a live soundtrack alongside a golden-oldie cinematic icon that’s still about 20 times better than most of the garbage on screens in 2012. I speak of Charlie Chaplin’s MODERN TIMES, a pantomime masterpiece starring Chaplin as “the worker,” supposedly the final iteration of his Little Tramp alter ego. The LT is a frazzled assembly-line drone who suffers a hilarious nervous breakdown on the job (this being 1932, it's comedy; today Charlie would just grab a gun and kill everyone). Fired, he goes looking for employment and humanity in a Depression-era world of shantytowns, waifs, strikes and huge machinery.

How the Orchestra will serenade alongside this is a most interesting proposition. Under considerable commercial pressure in the early sound era, Chaplin actually considered making MODERN TIMES a full “talkie” and did some dialogue-laden test sequences. But in the end he decided he much preferred the high-speed rhythms and nonverbal antics of the silent cinema. So he did a hybrid, leaving most of the narrative wordless, writing his own recorded music score (which the Orchestra will perform) and inserting occasional sound effects and audio stuff – most famously, a catchy melody in pure gibberish that the worker/Little Tramp trills during a brief, doomed stint as a singing waiter. It seems that a live chorus of singing waiters will perform alongside the Orchestra in Severance Hall.

And since the Cleveland Orchestra, like the laborers in the movie, have lately been embroiled in union controversy and threats of walkouts, the synergy could hardly be more apt (unless of course the Orchestra departs Cleveland over the weekend and moves to Florida to play for the Miami Heat). MODERN TIMES with the Cleveland Orchestra performs at 8 p.m. on Tuesday, Dec. 11. Tickets begin at $55. For more information log onto www.clevelandorchestra.com, or call the box office at 216-231-1111 (toll free  800-686-1141)

For a full Cleveland Movie Blog review of MODERN TIMES, click here:  http://www.clevelandmovieblog.com/2011/05/modern-times-may-6-at-730-pm-and-may-7.html
Posted by Charles Cassady Jr. at 8:25 AM