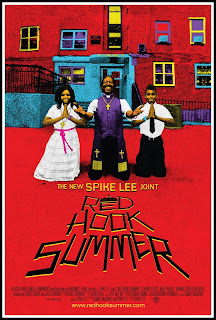 Spike Lee's RED HOOK SUMMER starts out as a fairly typical coming of age story. 13 year old Flik Royale (Jules Brown) has been sent by his mother to spend the summer in Red Hook, New York under the care of his Grandfather, Da Good Bishop Enoch Rouse (Clarke Peters). The urban locale is a bit of a culture shock for Flik, accustomed as he is to life in suburban Atlanta, but even more jarring is his sudden immersion in religious life. Flik is far more interested in recording the strange new world around him on his iPad2's camera and hanging out with Chazz (Toni Lysaith), the asthmatic daughter of a one of his grandfather's parishioners, than in heeding Enoch's calls to come to Jesus.


The film hits many of the expected beats, giving us an awkward semi-romance between Flik and Chazz, and focusing on Enoch's difficulty in understanding and connecting with his grandson. Then the movie throws us a curve-ball about halfway through that changes everything. It's a bold and surprising turn for the film to take, and certainly gives the viewer something to think about. At the same time it's so out of left field that it almost seems like the movie isn't playing fair.

Lee has returned to his low budget roots with this film, and there are definitely some rough edges showing as a result. Clarke Peters gives a riveting performance as Da Good Bishop, doing his best to carry the film, and  Brown is engaging if unpolished as Flik. The rest of the supporting cast is uneven at best, however. Lysaith in particular just isn't up to such a substantial supporting role, shouting all her lines and showing little range of expression. Irregardless of the performances, the movie suffers from a script that needed a little more polishing to make its sudden shift in tone and focus work. There's also a fair amount of padding; the 2 hour running time could easily have lost 20 or 30 minutes with no ill effect. There are enough moments in the film that work to make it worth watching, but as a whole it falls short. 2 1/2 out of 4 stars.