Repost: Madeinusa (December 27th at the Cleveland Museum of Art)

[MADEINUSA screens Thursday December 27th at 1:30 pm at the Cleveland Museum of Art.] 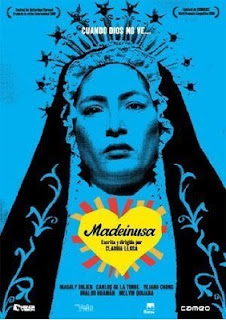 Some people celebrate Mardis Gras as an orgy of indulgence prior to the fasting of Lent. The villagers of the (fictional) town of Manayaycuna have something similar in their “Holy Time” festival. They believe that for three days corresponding with the period between when Jesus was supposed to have died on the cross and subsequently risen on Easter Sunday, God is literally dead. Therefore, with no God to watch over them, there can be no sin. Or at the very least, no punishment for sin. The town's mayor Calo (Juan Ubaldo Huamán) has been anxiously awaiting this year's festival so he can finally have sex with his fourteen year old daughter Madeinusa (Magaly Solier). City slicker Salvador (Carlos J. de la Torre) is just passing through and finds himself alternately bemused and appalled by the villagers.  That doesn't stop him from engaging in some questionable behavior of his own, though.


MADEINUSA may not be a horror movie, but at times it comes close. Certainly what Calo has planned for his daughter is horrific, cultural tolerance be damned. On a more subtle level, the way Salvador's bus driver refuses to enter the village brings to mind the how coachmen always refuse to get too close to castle Dracula. The contrast between Salvador's modern viewpoint and the almost pagan version of Christianity practiced by the villagers recalls (the original, good) THE WICKER MAN, while the manner in which Madeinusa and her sister Chale (Yiliana Chong) interact with Salvador is reminiscent of Don Siegel's THE BEGUILED.  But creeping out the audience is far from being this film's primary concern.

Even if you only look at the surface, MADEINUSA is a highly original and imaginative film filled with striking visuals. On a subtextual level, though, I think it's about the choices facing indigenous women like Madeinusa as the modern world encroaches on them. It's notable that Madeinusa's father is also the village leader, making him a symbol of tribal authority as well as a literal symbol of patriarchy. Representing the modern secular world, Salvador seems to offer a way out, but he ultimately takes advantage of Madeinusa as well. The two men are opposite sides of the same patriarchal coin. Ultimately, the film seems to suggest that Madeinusa's best option is to reject both of them and set out on her own path. 4 out of 4 stars.
Posted by Bob Ignizio at 12:00 AM