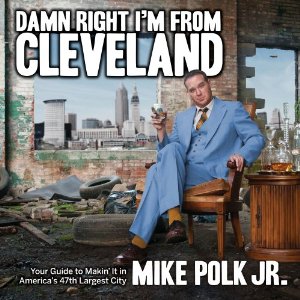 If you're going to live in Cleveland, you might as well have a sense of humor about it. Comedian Mike Polk Jr. certainly does. He's the guy responsible for those “Hastily Made Cleveland Tourism” videos. He's also the author of one of the finest pieces of bathroom reading material to come out in 2012, Damn Right I'm From Cleveland. I don't mean that as an insult; as Polk himself readily admits, this is barely a real book. It's basically just a collection of short essays and cheap visual gags tailor made for reading a few pages at a time.

All the crucial Cleveland subjects are covered – the Free stamp, the East side/West side rivalry, Michael Stanley, Dick Goddard, The Rock Hall, the ickiness of Edgewater Park, and of course plenty on our area sports teams, where jokes practically write themselves. And what would a Cleveland humor book be without at least some mention of the notorious “Cleveland Steamer”? I am kind of shocked that the only mention of Cleveland's fine horror movie host tradition was a suggestion for a new Great Lakes Brewing Company beer (“Little John Stout”), but you can't have everything.

Polk takes a self deprecating tone throughout, which helps mitigate the few occasions where he comes off like a frat boy, such as the sections on the different types of Cleveland girls and hot area bartenders he likes to stalk. Misogynistic? Maybe. Not funny? Definitely. Thankfully none of the sections take up more than a page or two, so the duds are over with quickly and something funnier is just around the corner. 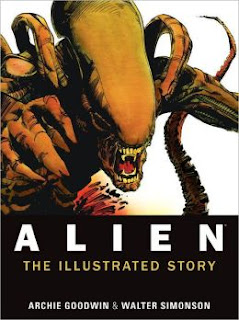 I was 9 years old when Ridley Scott's horror/sci-fi hybrid ALIEN hit theater screens in 1979. I had seen the TV spots and pictures of the monster in Starlog and Fangoria magazine, and damn if it didn't look cool. But there was no way my parents were going to take me to see an R rated horror movie in a theater.

As it turned out, there was one other source for knowledge about the movie; in fact, an extremely comprehensive source. That was the comic book adaptation published by Heavy Metal magazine. For those not familiar, Heavy Metal had nothing to do with head-banging rock & roll. Rather it was a mature readers science fiction and fantasy magazine size comic book. With the comic's code authority in full effect at the time, there was no way that one of the major comic book companies like Marvel or DC could publish a faithful comic adaptation of ALIEN, but there were no such restrictions for the magazine size comics. And that I first saw the chest burster scene while paging through the periodical that contained it in a shopping mall Waldenbooks.

Goodwin and Simonson do a fine job of translating film to printed page, something I was able to verify just a few short years later when ALIEN made its pay cable debut. On the surface Goodwin's scripting follows the film pretty closely, but he brings his own point of view and tone to the material. Simonson's artwork hadn't fully developed at this point in his career, but it's still unmistakably his work. He doesn't shy away from the gore, and you'll see more of the titular monster here than you will in the movie. Surprisingly given Heavy Metal's tendencies towards the sexy stuff, however, he downplays Ripley's final underwear-clad showdown with the creature.

While it's no classic “graphic novel”, Alien: The Illustrated Story is an enjoyable artifact of the film it adapts, and a nostalgic reminder of a time when instead of going online to have a movie ruined for you, you had to buy something like this, and Titan should be commended for making it available again.
Posted by Bob Ignizio at 1:33 AM