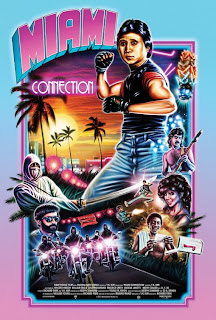 The one thing that the best “so bad it's good” movies have in common is a magical blend of sincerity, cluelessness, and just enough technical filmmaking skill to insure that the finished product bears some resemblance to an actual movie. These qualities are the difference between an undying masterpiece like Ed Wood's PLAN NINE FROM OUTER SPACE, and some forgettable would-be cult classic using “so bad it's good” as an excuse to be just plain bad. There are far too many of the latter, but never enough of the former. That's why it's a cause for celebration among bad film aficionados that Drafthouse Films has rescued the "lost" 1987 film MIAMI CONNECTION from obscurity and unleashed it on theater screens nationwide, with a home video release to follow on December 11th.

Fans of eighties cheese will be in heaven as they watch Dragon Sound, a synth rock band comprised of orphaned Tae Kwon Do experts, do battle with coke-dealing motorcycle-riding ninjas and an assortment of clichéd 80's movie bad guy types. Really, what more do you need to know? Hopefully not much, because the plot is kind of haphazzard and just plain ridiculous.

The acting is mostly awful, although a few cast members rise to the level of competent. Lest you think the action scenes might compensate, despite the fact that almost everyone in the film was a student at co-writer/co-director/star Y.K. Kim's Tae Kwon Do school, the fight scenes are all shot and choreographed ineptly, proving that just because you're a martial arts expert, that doesn't mean you know how to present yourself on film. On the plus side, female lead Kathy Collier does possess a pretty solid Pat Benatar-esque singing voice, even if she only gets to sing one song, and the song in question is titled “Against the Ninja”.

MIAMI CONNECTION may fall short of almost all traditional cinematic standards, but when it comes to the one that matters most, entertainment value, it delivers in spades. It has the kind of idiosyncratic personality that mainstream Hollywood films, in their quest to please the lowest common denominator, almost never possess. However you respond to it, you are responding to a genuine cinematic vision, realized as best as those involved were able to. You want a star rating? By traditional movie critic standards this would probably be a 1 star movie, but if you value entertainment over aesthetics, it's worth far more than that. 3 out of 4 stars.