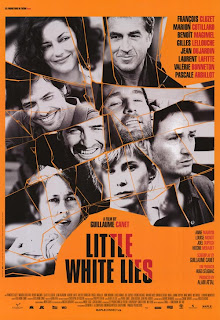 My being a freelance movie critic may not pay well (or pay anything, really), but it does carry one benefit: not many friends. And when you don't have any friends, you don't have to put up with more than one's standard and depressing share of the tedium of crying over broken romances, health crises, addiction and, in the northeast Ohio region, job loss and Alcoholics Anonymous.

No, that sort of drama is best experienced (if experienced at all) vicariously through drama. And LITTLE WHITE LIES (an accurate translation of the title Les Petits Mouchoirs) is a glossy 2010 French comedy-drama that celebrates "friendship" in a way that might make audience members wish they were, well, freelance movie critics like me.

The film, written by director Guillaume Canet (who, just like many a Hollywood director, likes to punctuate things with loud North American classic-rock on the soundtrack), begins with a raucous birthday party held by a bunch of Parisian professionals. They more or less come together annually for a two-week seaside vacation. Only this time one of the companions, a guy named Ludo, does too many drugs at the party and winds up mangled in the hospital after his motorcycle gruesomely smashes into a truck.

Nonetheless, after some deliberation, his pals decide to go out of town on to their usual fortnight together, at the luxury beach house of Max, an upscale restaurateur. But Ludo's tragedy seems to cast a pall over the occasion. So does the fact that one of the revelers, despite a lovely wife and kids, has just confessed a secret closet-gay man-crush to the object of his affections, the severely uptight Max.

Meanwhile, Marie (Marion Cotillard, probably the actress here most familiar to US audiences), an adventuress just returned from the Amazon, has had maybe two breakups simultaneously - one with a guy, one with a girl. Another vacationer draws everyone into his obsessive text-messaging to find if Juliette, his gorgeous longtime lover is going to choose between him and a fiance. Another guy keeps up a ruse that his performing-artist girlfriend Lea is en route; in fact, she doesn't want to have anything to do with him anymore. Oh, they think about absent buddy Ludo from time to time. But not nearly as much as they should, it turns out.

Late in the film a peripheral character, an avuncular old fisherman who has been mentoring these chic Parisians in boating and other simple pleasures for decades, finally berates them on their self-absorption and petty deceits. And, if you're like me, you say to yourself, right on man! These are pricks! But we the audience have just invested two and a half hours' time with them. That's HOBBIT-length, you know. What does that make us?

Oh well, the acting is good, the people are good-looking, and with the Cleveland weather turning cold and leaden (just like the economy), the tropical locations make a nice getaway for a time. And it's just possible that, when all is said and done, these characters have learned something and will never be the same again. Still, allow me to suggest another title, one that needs no translation: LES DOUCHEBAGS. (2 and 3/4 out of 4 stars)