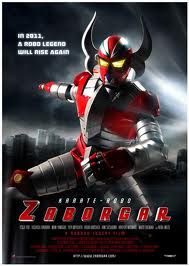 Stuck for a Christmas gift for that certain breed of cult-film connoisseur with a yen for low-rent Japanese superhero kitsch of yesteryear? In other words, for Cleveland filmmaker Robert Banks? The description fits pretty much nobody else I can think of. Once Robert showed an Ultraman episode on 16mm at the Museum of Contemporary Art. Counted for me as the high point in that institution's existence.

So okay, stuck for a Christmas gift for Robert Banks? Then allow me to recommend KARATE-ROBO ZABORGAR. Director Noboru Iguchi, obviously a fan, does an over-the-top campy revisit here to a genre that would seem beyond parody, the live-action sci-fi karate-action superheroes of yesteryear's Japanese children's television. Anyone for a Kikaider Kick?

I plead knowledge of Kikaider only because it once got a writeup in the scholarly journal American Film, for bemoaning the pathetic state of TV in Nippon. But Kikaider, along with Ultraman, Voltron, Gigantor and a host of other cybernetic superheroes, were diversions for generations of Japanese schoolchildren in the 1960s and 70s (when they weren't bullying each other into student suicide). Yes, the salarymen of today are, in part, the product of Johnny Sokko and his Giant Robo reruns of yesteryear, and some of those superhero franchises were later redubbed and edited together with new footage shot for US audiences. The Mighty Morphin Power Rangers arose from such a cross-cultural pollination (and look how well its viewers turned out, yeah right). KARATE-ROBO ZABORGAR, meanwhile, brings post-digital f/x and attitude to a similar franchise well remembered in the Far East (I presume; you couldn't get me out there today in a foolproof anti-radiation suit).

Neglected son of a scientist, martial-artist Yutaka Daimon fights evil with his father's greatest invention, a motorcycle that converts into Zaborgar, a karate-savvy robot. And, since Zagorgar incorporates DNA from Yutaka's deceased sibling, the transforming motorcycle is, yes, literally Yutaka's brother. With the corrupt Japanese Prime Minister kidnapped (repeatedly) by an evil, wheelchair-bound mad scientist in a weirdly phallic floating castle, Yutaka and Zaborgar fight marauders whose principle weapons include a number of scantily-clad cyborg girls. The girls can launch missiles (and occasional dragons) from their breasts - a joke that tends to be bra-beaten with overuse but still makes for some of the keeper cinematic moments from 2012, at least for me.

Then a rather post-modern twist sidelines Yutaka, and the plot jumps ahead a quarter century. Now Yutaka is wracked with age infirmities, his old employers in the secret-agent biz have been laid off and sunken into poverty - and the Japanese prime minister is a corrupt and unappreciative bastard who, it turns out, had a secret reason for being in perpetual peril. A reunion with long-lost Zaborgar leads to a suitably daffy showdown-finale.

Of course, the basic logline will be familiar to western viewers, who saw their favorite small-screen show "mythologies" transformed into comedy-satire via big-budget Hollywood spoof-reboots of the likes of Dragnet, Starsky & Hutch, 21 Jump Street and Dark Shadows. Thus the too-weird-for-TV hijinks from KARATE-ROBO ZABORGAR include an insectlike creature dubbed the "Acid-Spewing Diarrhea Robot," unplanned cyborg pregnancy (no nudity, despite the cheesecake), and Tokyo stomped by a Godzilla-sized stereotypical Japanese schoolgirl.

Even we white-devil-barbarian round-eyes lucky enough to be unfamiliar with garbage TV Japan-style should get some big laughs at the ridiculous violence, and CGI-rendered blood splashes are inoffensive and silly. And yes, folks, as if proof were required that a real Zaborgar series on Fuji TV aired in the 1970s - and it did indeed have trucks tricked out to resemble giant bulldogs - clips from it unreel in all their non-digital glory over the closing credits. Proving that, however much Noboru Iguchi amped up the dorky and absurd elements in his burlesque tribute, it still doesn't fall too too far from the original. Or did Robert Banks tell you that already? (3 1/4 out of 4 stars)