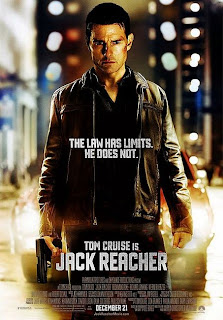 It will come as no surprise that Tom Cruise is a convincing hero as title character JACK REACHER. Cruise plays an ex-Army, no-nonsense justice seeker drifting on the fringeS of society turned homicide investigator. He is a ghost by most societal standards – no driver’s license, no phone, no address, and just one outfit.

JACK REACHER, based on the novel One Shot by Lee Child, tells the story of an investigation after five civilians are shot by a sniper in broad daylight in downtown Pittsburgh. When the main suspect, Barr (Joseph Sikora) – also ex-Army – is detained and charged, Reacher shows up in the DA’s office as if by tough-guy magic (he saw the report on the news). Reacher sets out to prove the suspect is guilty, but is hired as the lead investigator by the defense attorney Helen (Rosamund Pike).

Aside from a handful of tense moments and longing looks, there’s no love story here. The movie is all investigation, clues, and action. The film harkens back to action movies of the 70’s with fewer stunts and effects and more nitty-gritty car chases, suspense and chasing down bad guys. Plus a few lines so bad, they're good! There’s a zany quality to the opposition which feeds the larger-than-life persona of Jack Reacher and provides a few good laughs in the theater.

There’s a little lacking in the story behind the bad guys – what were they so upset about again - but as the film unveils their motive, it all feels a little silly and unconvincing. It's clear Cruise isn't pushing his acting anywhere he hasn't before, but the entertainment value is still there. The film rests on Cruise's shoulders, who has playing cool down to an art.

Writer and director Christopher McQuarrie has worked with Cruise before, as a writer on VALKYRIE (2008) and he’s been tapped to write MISSION: IMPOSSIBLE 5 which is scheduled to arrive in 2015. In what has to be the boldest casting choice of 2012, McQuarrie called on Werner Herzog (famed German filmmaker) to play the movie’s cold-blooded leader of miscreants, “The Zek,” which translates to “the prisoner” in Russian. His character is spooky and alarming, if underdeveloped.  Robert Duvall, always a sure bet, plays an old-fashioned, ex-Marine gun shop owner, Cash. He is as likable of a sidekick as you could ever hope for, humor and all. David Oyelowo – who we saw in LINCOLN recently – plays Emerson, investigator for the DA. Much like Herzog, Oyelowo's character is played convincingly, but the character seems only half written.

JACK REACHER is a satisfying adventure with no real dead air. And it’s a good reason to cheer for truth, justice, and a little ass-kicking and muscle car racing.