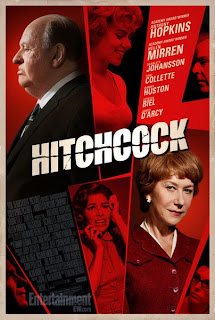 While most film critics seem to prefer VERTIGO, the Alfred Hitchcock film that would likely win the “people's choice” award from regular moviegoers is PSYCHO. The not-quite-a-biopic HITCHCOCK purports to tell the story of how PSYCHO was made while simultaneously exploring the dynamics in the relationship between the Hitchcock and his wife, Alma Reville. Both aspects of the film are shallow and factually dubious, but the cast is fun and director Sacha Gervasi's light, often humorous approach to the material at least make for a mostly entertaining film that is thankfully free of the overly serious tone that characterizes so many Hollywood biopics and “based on a true story” productions, especially those so obviously “going for the Oscar”.


HITCHCOCK opens with what may well be its best scene. Here we meet Ed Gein (Michael Wincott), the real-life killer whose exploits provided the inspiration for author Robert Bloch's novel Psycho. We witness Ed murder his brother, and then the “Master of Suspense” himself (Anthony Hopkins) steps onscreen to offer a few macabre jokes and introduce the film in the manner of his television show Alfred Hitchcock Presents. We then get on to the business of the legendary director trying to mount a film version of PSYCHO, a property that was considered too gruesome for the standards of the time.

We also see Hitchcock's wife Alma (Helen Mirren) serve not just as a sounding board for her husband's ideas, but offer many excellent suggestions of her own. This all while having to endure the pervy director's constant fantasizing over his female stars. It's no wonder that she responds so favorably to fellow screenwriter Whitfield Cook (Danny Huston), who suggests they work together on a script but may have more in mind than just an artistic collaboration. Scarlett Johansson and James D'Arcy are also on hand as PSYCHO stars Janet Leigh and Anthony Perkins, respectively, with D'Arcy in particular giving an uncannily spot-on performance.

Unfortunately the film has a number of problems, the chief among them being its need to overstate Alma's contributions to the making of PSYCHO. If the film is to be believed, she was just as responsible for the success of PSYCHO as her husband, if not moreso. At one point a character even states that she ought to have been given co-writing credit with Joseph Stefano for the screenplay. Stephen Rebello's Alfred Hitchcock and the Making of Psycho, the book this film is allegedly based on, simply doesn't bear that out, nor can one find support for such a notion anywhere else.

The sad thing is, in trying so hard to build Alma up, in a way the film does her a disservice. The implication is that her actual contributions to this and several of her husband's other films weren't significant enough to matter, when in fact they very much were. And it goes without saying that those individuals who actually did make some of the contributions Alma gets credit for here are shortchanged as well.

Another misstep is the curious device in the film by which Hitchcock has internal monologues with Ed Gein. Bloch's novel was only loosely inspired by Gein, and there's no reason to think that Hitchcock was particularly interested in the real life murders. He was far more intrigued by the cinematic possibilities of Bloch's shower scene and the shock of having his film's leading lady murdered only a third of the way in. I suppose some artistic license can be given, but even still these scenes just don't work very well. Neither does the subplot about Alma and Cook. It's banal soap opera stuff at best, and aside from being yet another factually dubious element, it adds little to the film. HITCHCOCK is still a marginally enjoyable movie, but one's time would be far better spent reading Rebello's book or just watching PSYCHO again. 2 out of 4 stars.
Posted by Bob Ignizio at 2:04 PM