Charlie is My Darling (now available on home video)

[CHARLIE IS MY DARLING is now available on home video.] 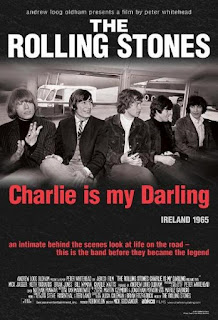 The Rolling Stones visited the Emerald Isle for a second time in 1965 for a pair of dates in and .  Manager Andrew Loog Oldham enlisted Peter Whitehead (LET'S ALL MAKE LOVE IN LONDON) to capture all the highs and lows of the mini-tour on 16mm film—from the band’s first live concert performance of “(I Can’t Get No) Satisfaction” to downtime in hotel rooms and airport lobbies.  Glyn Johns recorded the sounds of the trip, and would go on to become a super-producer, helming landmark albums for Steve Miller and The Who.


The resulting Oldham / Whitehead black-and-white film, CHARLIE IS MY DARLING, surfaced initially as a grainy 35-minute curio with an out-of-synch audio track.  Oldham assembled a longer “producer’s cut” with extra footage in the 1980s, but it wasn’t until the Grammy-winning team of director Mick Gochanour (ROLLING STONES ROCK N ROLL CIRCUS) and producer Robert Klein stepped in (with editor Nathan  Punwar) that Charlie received the royal treatment it deserved.


Featuring over 60% of new, unseen Whitehead film and re-dubbed sound, the meticulously restored, nearly half-century old documentary is now a multimedia time capsule whose contents transport viewers back to the Stone Age, so to speak.  Back when Eamon Devalera was President of Ireland and Lyndon Johnson occupied the White House—and a whimsical 22-year old Mick Jagger was testing the waters of superstardom.


“Rock is ephemeral,” Jagger tells the cameraman.  “We’ll be a around for a year, a year and a half.  Then it’s over.”


Of course, Mick's Irish contingent (and kids everywhere) had other ideas about the Stones’ longevity.  When asked which band member they like most (and why), most of the Dublin teens can’t articulate any responses that go beyond fashion sense or hairstyle ("I just like him," "He's sexy," etc.)—but the fans' enthusiasm inside (and outside) ’s Adelphi Theatre and ’s ABC Theatre rivals Beatlemania at its best (and worst).

The performances alone warrant checking out the disc.  The impossibly young-looking band charges through “The Last Time” at the former venue before prompting further hysterics with “Time is on My Side.”  Jagger removes and teasingly offers his white sport coat to the crowd prior to “It’s Alright,” which finds the snake-hipped singer shaking four maracas and whipping the audience into a revival-like frenzy--and one soon realizes that all noteworthy rock front men who followed owe Jagger a debt for blazing the trail.

A few bold spectators finally breech security and take the stage, mobbing Richards and crowding drummer Charlie Watts.  Watching it now, one wonders what made the troublemakers think their behavior was in any way kosher.  How can a person possibly think the guitarist will keep playing while you piggyback on him?   Later, a sneaky female fan is seen plucking a hair from an unsuspecting Richards as he chats up another girl in an airport lounge.


“Physical contact,” laments bassist Bill Wyman.  “They’ll touch your coat, any part of you, just to say they did.”


“If there’s a crowd, there’s always violence,” Jagger surmises.  “The people on the periphery keep trying to get to the middle.”


Jones claims he never aimed to be a pop star.  “I enjoy it…with reserventions,” he explains—inadvertently coining a more fitting adjective.  “Our sort of success is a first class ticket to other things.  On the other hand, there’s not much physical freedom.  We have to choose very carefully where we go.”


Some of that caution becomes apparent as the band scurries from cab to train to charter plane with dozens of fans nipping at their heels.  Police patrol crowded intersections outside the theatres, where scores of ticket-holders (and hopefuls) talk giddily about their heroes till door time.  One gets a sense the Stones' days were filled (and still are) by a great deal of glancing over their shoulders on train platforms and airport tarmacs.


The September 4 show in goes more smoothly, which is to say the fans don't bum-rush the stage and tackle the musicians.  The Stones blast through “Everybody Needs Somebody to Love,” “Pain in My Heart,” and “Satisfaction” with abandon.  Whitehead does a commendable job getting tight shots of each band member for having just a hand-held camera in noisy environs.  Jagger is a dervish of sexual energy, channeling African-American rockers like Little Richard and Chuck Berry for the British rock set.  Dressed predominantly in white, the blonde Jones looks almost angelic picking away on his Gibson Thunderbird.


CHARLIE also affords several glimpses behind the scenes as the guys interact with groupies, tease the kitchen help with kisses through window glass, stage a faux Lipton tea commercial, thumb idly through magazines like LIFE, and pose for pictures with crewmember’s extended families.  Courtesy Whitehead’s omnipresent lens, we’re privy to the Stones’ backstage warm-ups and dressing room routines.  We follow Jagger and company as they march down dimly-lit staircases and cinderblock hallways to the stage in what may be the first of many copycat pre-show clips that—in the aggregate—would inspire an amusing sequence (“Hello, Cleveland!”) in rock parody THIS IS SPINAL TAP fifteen years later.


But  perhaps the true highlights are those precious fly-on-the-wall moments where we watch Mick and Keith kill time in hotel rooms with impromptu “unplugged” sessions wherein Richards noodles on an acoustic guitar as Jagger riffs lyrics for “Sitting On a Fence” and “Tell Me (You’re Coming Back).”  They even cover The Beatles’ “I’ve Just Seen a Face” and “Eight Days a Week.”  When Richards accidentally bumps on a sofa with the headstock of his guitar, it’s hard to tell whether his apology is directed toward the drummer or the instrument.


Later, Richards proves himself a nimble blues pianist, pounding out Fats Domino’s “Blueberry Hill,” Dion & The Belmonts’ “Teenager in Love,” and Elvis Presley’s “Are You Lonesome Tonight” and “Santa, Bring My Baby Back to Me” on a baby grand while Jagger croons along drunkenly.  It’s an amusing, intimate vignette showing the boys just being boys, and their jam soon devolves into a game of sliding wine glasses across the piano.


Bonus features consist of both the 35-minute original film and 50-minute producer’s cut.  There’s also a fascinating section explaining the process used to clean and edit Whitehead’s negatives and prints.  Discussions about the scanning technique and frames-per-second may go over the heads of some viewers, but split-screens demonstrating the quality “before” and “after” repair evince the TLC applied to the removal of dust, lint, and lines, and illustrate how the contrast and transfer resolution were enhanced.  Extras also include full interviews with the individual Stones, wherein each player candidly reflects on the circumstances bringing their whirlwind tour to Ireland—and ponders things they’d be doing if they weren’t stars.


Jagger comments on the blossoming flower power movement occurring “especially in America” noting how young people have mobilized against the war in Vietnam, embraced free love and sexual liberty, and rejected the tired values of their parents.


“They know they’ll get all the things that were impossible fifty years ago,” Mick muses.  “It’s up to them to carry on these ideals.”


Some of Jones’ remarks seem prophetic now, given the facts surrounding his drowning death in 1969.


I’ve never thought that far ahead,” he confesses.  “I’ve always been a little apprehensive about the future.”


The Stones would welcome other filmmakers into their midst as they continued their global conquest in the 70s and 80s.  Martin Scorsese participated in the making of gritty  doc GIMME SHELTER.  Hal Ashby shot the band on tour in the early 80s for LET'S SPEND THE NIGHT TOGETHER.  More recently, Brett Morgan compiled old footage for his CROSSFIRE HURRICANE rock-umentary.


But the remodeled CHARLIE IS MY DARLING will endure as the earliest—and perhaps most enlightening—portrait of one of rock’s most sensational bands on the cusp of world domination.  3 1/2 out of 4 stars.
Posted by Peter M. Roche at 12:00 AM