I'm trying to get caught up with the films I missed this year before making my obligatory “Best of the Year” list. Most of the films I'm watching have already been reviewed by other writers here on the Cleveland Movie Blog, but a handful slipped through the cracks for whatever reason. So to what degree I can, I'll be reviewing some of these films that are now available on home video. This time around I've got capsule reviews for a pair of documentaries and one arthouse dramedy “based on a true story”: PAYBACK, THE INVISIBLE WAR, and HYSTERIA. 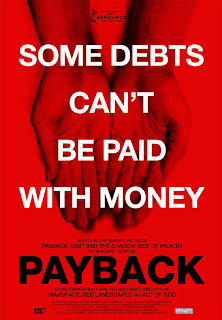 Based on the nonfiction book Payback: Debt and the Shadow Side of Wealth by noted Canadian author and activist Margaret Atwood, PAYBACK is an exploration of the concept of debt and the various effects it has on society. Although monetary debt is dealt with, it is by no means the only kind of debt covered by the film. In fact the most interesting segment to me was the one about two families involved in an Albanian blood feud, and the insistence of the man who believes himself to be the injured party on dealing with things personally rather than allowing the legal system to settle it. There's also a segment on the BP oil spill that explores what the company really owes to the earth for the damage the incident caused compared with the monetary fines that were assessed by the United States government. The other segments are all interesting and thought provoking as well. That said, PAYBACK doesn't entirely work as a whole, and while Atwood is an excellent writer, her skills as a public speaker are somewhat lacking, which wouldn't be an issue except that she speaks the opening and closing statements of the film. Of course it goes without saying that most American conservatives will hate this on principle alone. 2 1/2 out of 4 stars. 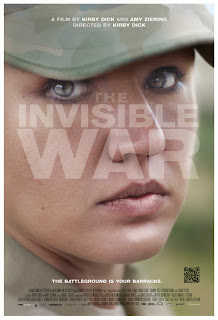 That men and women who put themselves at risk to serve their country should find themselves raped by those they serve alongside is appalling. Even more appalling is the way the military has tended to handle such cases. THE INVISIBLE WAR interviews several service women (and a few men) who were victimized while they were enlisted, and their stories will anger and disgust anyone with an ounce of empathy. One often wonders when watching documentaries that deal with disturbing issues like this what good they really do; in this case, we find out that sometimes, a movie really can make a difference. Maybe not as much of one as was needed, but a step in the right direction at least. 3 1/2 out of 4 stars. 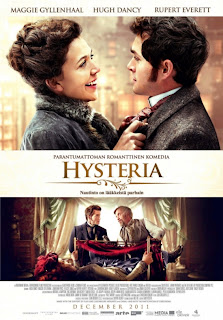 In the not so distant past women were often diagnosed with hysteria, a catch-all term for just about any ailment or presumed condition a woman might suffer from, especially in cases where the women in question were deemed to be difficult. The primary treatment, considered a genuine medical procedure, was to have a doctor manually bring the patient to orgasm, something the physicians often regarded as hard, tedious work. And so the vibrator was invented. HYSTERIA gives a highly fictionalized account of all this, squeezing it into a slightly “naughty” British arthouse rom com starring Hugh Dancy and Maggie Gyllenhaal. In real life it wasn't always so funny, as a hysteria diagnosis could result in institutionalization and even forced hysterectomy, something the film only casually touches on. Still, for what it is HYSTERIA is reasonably entertaining. Even if the truth does get toned down in favor of pursuing ribald laughs, the film at least reminds us of yet another sad chapter in the history of misogyny. 2 1/2 out of 4 stars.