Transformers: The Movie (November 17th at midnight at the Capitol Theatre)

[TRANSFORMERS: THE MOVIE screens Saturday November 17th at midnight at the Capitol Theatre.] 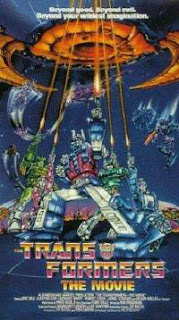 Once upon a time in a magical land - well, it was America in the 1980s - a series of Republican administrations decided to jump-start the economy by doing away with regulations on business. Willy-nilly, this resulted in lots of crappy children's cartoons.

Why? Because thanks to Reagan, influential toy companies Mattel, Hasbro, Tonka and Kenner were able to collude with cut-rate animation studios to map out TV cartoons (usually aired on Saturday morning or right after school, peak kid viewing times) that were nothing but disguised commercials for product lines of action figures, videogames or playsets. It was like repeating the bonanza of the STAR WARS-inspired toy army, except this time the toy designs came first, the scripts and characters just a weak afterthought. And the deregulated FCC was no obstacle.


Major offenders included Hasbro's re-militarized G.I. Joe, something called M.A.S.K. (which, because of its very short run, has become something of a hot item among collectors; ask at the Big Fun store near you), Pound Puppies, Jayce and the Wheeled Warriors, and the infamous He-Man and the Masters of the Universe. The  Transformers, which premiered in 1984, hyped a fleet of Hasbro model robot soldiers that could be folded into replica cars, planes, dinosaurs, boom boxes, etc. As the theme music said, "Transformers! More than meets the eye/Transformers! Robots in disguise."

You could possibly get away with arguing that The Transformers had artistic merit as being grounded in many Japanese "robo" and "mecha" cartoon franchises anyway - there are so many of those that it's practically a genre unto itself (of which the Robotech/Macross Saga is Lord of the Rings). But, believe it or not, at the time the cartoon/toy industry lobbyists claimed their Saturday-morning crap was vital for putting across educational messages, say about engineering, or courage, or friendship. Stuff like that, to get a rubber-stamp FCC pass. But if TRANSFORMERS: THE MOVIE teaches us anything, it's that in all the cleverly conceived, gimmicky buy-them-all! robots Hasbro/Reagan foisted on toy shelves, one was sorely forgotten: Scriptitron.

Long before Steven Spielberg and Michael Bay formed their own Axis of Evil to make a new round of live-action, CGI-infused Transformers movies, the traditionally cheapo-drawn TRANSFORMERS: THE MOVIE hit theaters about the same time I graduated from college - a sure sign that my life from then on was going to be, er, suckitron. The action is set in the `future' year 2005 (see previous sentence for my take on 2005). In the long-running show's mythology, as we all know by now, there's been an ongoing war between alien robot races, the good Autobots - and their friends the Dinobots - against evil Decepticons. Never mind that, except for the Dinobots, when these things are in their Japanese samurai-robot-inspired unfolded shapes, it's pretty difficult to tell one Transformer from another. When their planet fell to the Decepticons, the Autobots were able to befriend humans and set up a base on Earth.

TRANSFORMERS: THE MOVIE bids to be a grand finale to the TV show's episode cycle (though the franchise went on, of course). Here the perennial Decepticon warlord Megatron launches a sneak attack on Earth's Autobot city that, in a shock-horror moment, kills the show's longstanding hero Autobot, Optimus Prime. Before dying, Optimus passes on to his successor a glittery doo-dad called the Matrix (no mention of Neo or Morpheus) that's supposed to be really important. Meanwhile, a new menace comes along, a robot called Unicron who, like the LucasFilm Death Star, is a planet-sized machine that destroys and eats other planets. The only thing posing a threat to Unicron is the Matrix, so the monstrous robot gives the damaged Megatron an upgrade to capture it.

The confusing, jumbled and chaotic narrative features chases/fights with barely any breathing space and introduces so many weird characters and things (Sharkitrons, Insecticons) that only a Ritalin-deficient child-of-divorce kid who owns all the toy tie-ins could tell them apart. Which was probably the idea. The soundtrack is obnoxiously nonstop '80s rock music (sounding much like imitation Van Halen fanfares), though I must confess that during one particularly senseless chase scene (on a planet named Junk) there's a cameo by `Weird Al' Yankovic's Devo parody "Dare to Be Stupid" that even I felt was charming. Little touches like those at least indicate that nobody was taking much of this seriously, and direction is credited to Nelson Shin and Kozo Morishita. Of course! Who else?!

Animation, done by the Japanese, is strictly TV-grade, with a vocal cast being a curious mixture of prolific cartoon-voiceover specialists and time-proven Hollywood character actors - Leonard Nimoy (as Megatron), Robert Stack, Lionel Stander, Eric Idle, Scatman Crothers – who attempt to imbue individual Transformers with stereotypical personalities that the impersonal drawings don't convey. There's an old-timer, a young whippersnapper, a jivey black dude, a mighty lunkhead, and one robot who does everything fast - mainly to give a voice role to John Moschitta Jr., an actor in TV ads from the '80s renowned for talking really fast.

Most notoriously, Orson Welles logged his final screen credit as the unenthused stage-whisper of Unicron. Imagine the declining Welles, doing mellifluous TV commercials and every hired-gun gig he can to earn money to perhaps complete some of his many unfinished projects and unreleased fragments like THE DEEP, THE OTHER SIDE OF THE WIND, or DON QUIXOTE and making his last bow as a cartoon villain so fat he has to eat planets. Sad. And, yes, when Unicron is in planet-devouring mode you hear the same chomp-chomp sound effects used whenever any given cartoon dog has a Scooby snack, or something. Double sad. Stan Lee would never let them do that to Galactus. That Charles knows who Galactus is: Triple sad.

Yes, I am aware this film has an avid cult/nostalgia following, and that it fills in some sort of vital missing link in the mythology, and some theater-goers wept tears when Optimus died - so I've heard - though he was of course resurrected down the line. And I've even watched a season (I was paid to. Not enough, though) of the recent TV revival, Transformers Prime, which wasn't as bad as expected and even tried to retcon Unicron into a more mythic figure. But as for TRANSFORMERS: THE MOVIE, all I can say is that unless you're a hyperactive kid in 1986 or a stoned-out adult in 2012, this drama about the drawbacks of a planet-based diet...really bites. (1 1/4 out of 4 stars)