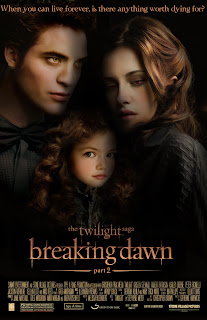 It’s been a long bumpy road, paved in sparkles and abs, but here we are: THE TWILIGHT SAGA: BREAKING DAWN – PART 2, the final installment in a series that’s gained more cultural caché from the shrill fervency of its fanbase (and detractors), and the romantic foibles of its lusty cast, than from its actual narrative, characters or cinematic artifice.

Watching the TWILIGHT films has been a learning experience. Granted, the only thing I’ve learned is how to successfully sit through a TWILIGHT film, but with this latest installment, I feel as though I have at last fine-tuned my expectations to the perfect low, greeting every wet, floppy morass of melodrama, half-constructed concept and wholly bootlegged plot contrivance with a knowing shrug, while shamelessly, willfully and brainlessly succumbing to what few fizzling surprises the film had to offer.

Now that Bella’s (Kristen Stewart) a vampire and werewolf Jacob (Taylor Lautner) has “imprinted on” she and hubby Edward’s (Robert Pattinson) totpire hybrid spawn, Renesmee (Mackenzie Foy), most of the romantic entanglements have been sorted out, leaving way for the story’s one lingering threat - aristocratic vampire parliament, the Volturi - to mince into the fore. Led by the flamboyant Aro (FROST/NIXON’s Michael Sheen), the power-thirsty Italian clan has mistaken Renesmee for a volatile immortal youth (see Kirsten Dunst’s character in INTERVIEW WITH THE VAMPIRE for reasons why such creatures are untenable) and are on their way to execute the whole Cullen clan for allowing such an abomination.

That all the eye-batting and chest-beating of the relationship shenanigans is significantly dialed down isn’t to say they don’t drip across the celluloid in a syrupy veneer, but rather that, for once, the film has to muster some narrative bullet points to throw up behind them.

My biggest complaint about every other TWILIGHT movie is that I always feel like there's nothing happening, and it’s happening at the speed of coral. There's just a lot of tears and kisses plastered to adolescent grandiosities, with pining stares that smolder on long past the duration of the scant action scenes and anorexic fantasy world-building.

So imagine my surprise when BREAKING DAWN – PART 2 structured itself around 3 of my favorite schlocky genre narrative tropes.

There’s (1.) a superpower training sequence, as vampire Bella learns to hone her defensive shield power, (2.) an assembling a team sequence, as the Cullens globetrot through a veritable IHOP menu of vampire stereotypes from around the world, and (c.) a climactic fantasy battle sequence that's no Battle of Hogwarts or storming of Minas Tirith, but when the biggest melee you're expecting is some spirited tongue jousting, its gratuitous CG decapitations are candy to the eyes.

Now I have two choices here: I can applaud the film for breaking into the so-called saga’s heretofore uninterrupted water-treading to imbue its final chapter with something akin to action and excitement. Or I could whine Internet-style about how meager each of these efforts feels - a training sequence in which supposedly epic energy harnessing abilities are, with the trusty assistance of love, mastered between a reel-end’s changeover marks; the assembly of a team where every solitary member – from the broguing gingers to the face-painted Amazons – is a fanged cliché; and the epic battle that… well, revealing the disappointment here would be to unleash spoilerzilla – suffice it to say, it’s too good to be true.

Really, I guess I’m just glad that that’s stuff in there. It’s a welcome change of pace that’s never savvy or interesting enough to feel at odds with the rest of the TWILIGHT universe. (The confounding use of narration and the part where you realize that I guess they’re all inside a book or something certainly don’t add to the film’s prestige.)

Watching this movie in a room full of gasping, shouting, clapping Twihards, there was a palpable sense of self-awareness – an obvious affection not just for the story’s mush-mired details, but also for  the gleeful camp of its grandest broad strokes, be they purposeful gratuitous ab shots or Michael Sheen’s fantastic, squealing bug-eyed affectations.

One thing I genuinely respect about both parts of BREAKING DAWN is director Bill Condon’s (GODS AND MONSTERS) and screenwriter Melissa Rosenberg’s (Dexter) ability to play to both sides of the audience – those fervently engaged with the story and those riding the phenom with half-guilty smiles – occasionally dialing up the soap opera sturm and drang to levels of absurd hilarity (take, for example, PART 1’s bed-busting fang-bang) and then settling back into a more manageable stock melodrama. It allows the serious to swoon and the self-conscious to smile without ever betraying TWILIGHT's core – a naïve attempt at classic romance that’s too earnest by half.