The Tin Drum (November 13th at the Capitol Theatre)

[THE TIN DRUM screens Tuesday November 13th at 7 pm at the Capitol Theatre in association with The Cleveland Cinematheque.) 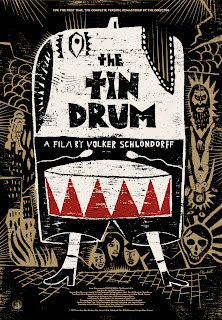 Maybe if I had studied German instead of French in high school or something, then my life would have taken a very different turn, and right now my lovely bride Heidi Klum and myself would be toasting long left-behind Cleveland, with our neighbor Lebron James at the Victoria's Secret After-Party in Miami. It's a nice thought. But no, I went with French. At least I finally read The Three Musketeers in the original (took a number of years), which got me insider moxie on any one of the numerous movie adaptations. But, probably because I did not take German, I also lost out, most likely, on reading the Gunter Grass novel The Tin Drum, which I am given to understand is Most Important. Okay, whatever. I finally got through the Twilight trilogy and so the literary part of the brain is still a bit numb.

What I am getting at here, in circumbendibus fashion, is that with my general avoidance of Teutonic culture I also put off seeing world-cinema classic THE TIN DRUM until just now, with a Director's Cut re-release of Volker Schlondorf's 1979 multiple award-winner (Best Foreign-Language Feature Oscar, among others). Whether it does justice to the Grass novel I cannot fully say, but as sheer cinema it is an incredible achievement, a Goya-esque pageant of the horrors and absurdities of 20th-century German culture, especially the little thing called Nazism.


The setting is Danzig, an industrial city divided between German and Polish influences following the First World War. Oscar is born to a multicultural menage-a-trois between proud German Matzerath, proud Pole Bronski, and a mother descended from an obscure third minority, the Kashubians. At age 3, at his birthday party, Oscar gets a tin drum as a present, and, as he senses the idiocy, lust and injustice of the adult world all around him, he simply decides to stop growing (he also discovers he can shatter glass when he screams, a superpower that surfaces now and then but never has real consequence).

Oscar remains physically a three-year-old (Schlondorf found a remarkable young actor named David Bennent, afflicted with a growth disorder that left him undersized) but goes through school (teaching himself Goethe) and puberty, and even playing his part, so to speak, in World War Two, in a USO-like troupe of dwarf entertainers - it is another one of Oskar's affectations that throughout life he carries and perpetually plays a toy tin drum, or, more accurately, a succession of tin drums obtained from the kindly local Jewish shopkeeper (French singing/acting star Charles Aznavour). In the meantime, with the tumultuous passage of years and the rise of Hitler, Oskar loses his three parental figures one by one, to suicide and to war violence. Bronski falls in with a short-lived Polish Resistance group while shopkeeper Matzerath becomes an utterly bland and bourgeois Nazi Party member.

I remember my college film-society cohorts back in the early 1980s being quite taken with this film, and I didn't know why (perhaps they were all German majors), as modern Europeon history, unless it involved Lucio Fulci, seemed slightly out of step with their aesthetic leanings towards ALIEN and DAWN OF THE DEAD. Having finally seen THE TIN DRUM, though, I more understand. Apart from the history-as-circus-freak-show elemental vibe, there is some seriously sicko imagery here, including eels extracted from a horse's severed head and the pocket-sized Oskar having some sort of a weird first-love ritual with [SPOILER ALERT, I GUESS] his father's blonde nymphet of a second wife, during which they make a sort of a fizzy candy-slime out of their own saliva and a popular chemical concoction and lick it off each other.

No wonder the Germans seem to lead the world in abnormal-psychology studies. If Hollywood remade THE TIN DRUM in an "Americanized" adaptation, in English (a real Day of the Locust proposition, but I could see them doing it, perhaps with young Macaulay Culkin as Oskar), the best director to do the job would be David Lynch. (4 out of 4 stars)
Posted by Bob Ignizio at 12:21 PM