[THE SESSIONS opens in Cleveland on Friday November 9th exclusively at the Cedar Lee Theatre.] 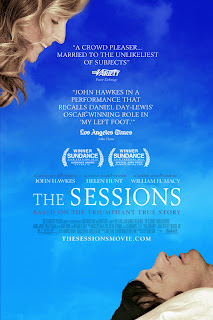 There are movies you enjoy watching, and there are movies that make you squirm. COMPLIANCE, for example, which recently played here, is a squirmer, a torturous, maddening drama based on the true story of a fast-food manager who detains and strip-searches an employee at the direction of a phone caller who is posing as a cop.

THE SESSIONS, written and directed by Ben Lewin, is a squirmer, but for different reasons. Based on a magazine article by Mark O'Brien, a polio victim in an iron lung who recounted his experiences with a sex surrogate, the movie spares the audience almost no discomfiting moment of this quest. In so doing, it challenges us to look at and think about something most of us would rather not consider – the sexual lives of the disabled. It is unusually frank, with considerable full-frontal nudity (female), lots of talk about penises, vaginas, nipples and orgasms. And it performs the rather deft feat of juxtaposing all of this with a theme of devout Catholicism.

The always interesting John Hawkes plays Mark, who spends all but a few of his hours in an iron lung since he contracted polio at age 6. His condition has not prevented him from graduating from college and having a successful career as a poet and journalist, but it does make him dependent on a series of attendants, some of whom he likes, others of whom he detests, and one he falls in love with. An unrequited crush on a pretty attendant named Amanda (Annika Marks) and an article he is assigned to write about sex among the disabled prompt O'Brien to seek the help of a sex surrogate, but not before asking for the blessing of his new parish priest (a weirdly long-haired William H. Macy), who uncomfortably assents. A certain amount of humor is wrung from the odd spectacle of Mark, horizontal on his gurney, in the church chancel, explicitly discussing orgasms with the priest while the faithful pray silently in the pews. “I'm getting close to my 'use by' date,” complains Mark, who at 38 is still a virgin.

Mark's surrogate is Cheryl (Helen Hunt, with a broad Massachusetts accent), a sympathetic but businesslike therapist who keeps her private life (she has a husband and teenage son) off limits for discussion. The film offers an interesting view of the kind of person who might work in this unorthodox profession. Cheryl is a “free spirit” who has never been shy about nudity and sex, but is also immensely compassionate – her husband, before a bout of jealousy seizes him, calls her “a saint.” Cheryl's view of Mark is kindly but also clinical; she helps him develop “body awareness” and gradually moves him into expressing himself sexually with her. She first must help Mark overcome his emotional blocks stemming from childhood guilt over the death of his little sister and a particularly retributive view of religion.

Over a series of trysts – er, sessions – at the home of a disabled woman friend, Mark grows more adept. Not surprisingly, he becomes attached to Cheryl, pronouncing her “the most wonderful person on the planet,” writing her a love poem and asking her to meet him for coffee. Cheryl is also emotionally affected by her unusual client who, although perpetually horizontal, has a self-deprecating sense of humor that ladies seem to find irresistible, except for his sympathetic but businesslike Asian-American attendant Vera (fetchingly underplayed by Moon Bloodgood).

To say that THE SESSIONS (originally titled The Surrogate) isn't for everyone is an understatement. It's probably not for most people. But the performances are largely first-rate, and the subject matter is humanely and realistically handled. With the exception of extreme violence, just because something is difficult to watch doesn't mean it's not worth watching. 3 out of 4 stars.
Posted by Pamela Zoslov at 12:01 AM