The Flat (opens November 16th at the Cedar Lee Theatre)

[THE FLAT opens in Cleveland on Friday November 16th exclusively at the Cedar Lee Theatre.] 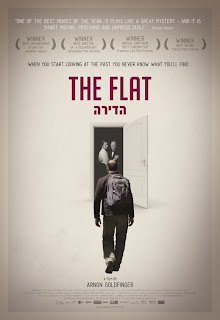 THE FLAT is a very personal story about a Jewish family’s history and the quest of a grandson to uncover deep family secrets that were relatively unknown until the death of his grandmother, a German Jew. The Israeli writer/director and grandson, Arnon Goldfinger, stumbles upon Nazi propaganda while cleaning out his grandparents’ flat after the death of his grandmother, Gerda Tuchler. The newspaper, Der Angriff, tells a story of a high ranking Nazi, Leopold von Mildenstein and his trip to Palestine. Within the publication, there are photos of Gerda and Kurt Tuchler, Goldfinger’s grandparents, accompanying Mildenstein and his wife. This piques Goldfinger’s interest and he becomes determined to find out why his grandparents would befriend a Nazi, let alone travel with one.

Goldfinger discovers that correspondence between the two couples had ceased during the war but, to everyone’s surprise, the friendship was rekindled after the war. Why would the Tuchler’s want to be friends with a Nazi criminal? Why would they accompany Mildenstein on a trip to Palestine where he was assessing the possibility of deporting Jews? These were only a few questions that Goldfinger was determined to try to answer.

Goldfinger is not afraid to put himself and his family in front of the camera. Some of the most emotional scenes feature him and his mother, Hannah Goldfinger, discussing her parents. Hannah was mostly oblivious to the relationship her parents had with the Mildensteins. At the end of the film, Goldfinger chastises her for not being interested in the history of the family. Gerda’s only living friend makes an excellent point that may answer Hannah’s lack of knowledge: the second generation never asked questions. Maybe this was due to the fact that they weren’t explicitly allowed to inquire about such painful matters. These are painful histories and exploiting them in front of a camera causes increasing anxiety.

There were a few times when I disagreed with how Goldfinger was approaching the subject. For example, he met with Mildenstein’s daughter twice throughout the film. After the first meeting, it’s apparent that she doesn’t really know much about her father’s activities within the Nazi party (or she’s reluctant to tell Goldfinger). Mildenstein had apparently told her that he had left to travel the world before the war started. But, as Goldfinger digs deeper into Mildenstein’s history, he discovers that Mildenstein actually began working with Goebbels after 1937, when he was supposedly outside of Germany. Goldfinger confronts Mildenstein’s daughter with this towards the end of the film and the revelation is heartbreaking. Of course, it seemed like Mildenstein’s daughter knew more than she was letting on. When Goldfinger would probe and press her for more information, she would sometimes become agitated and defensive. But was Goldfinger’s filmed confrontation with her appropriate? Her family’s secrets are now recorded and packaged into a feature length film about someone else’s family secrets. Ah, the ethics of documentary filmmaking.

THE FLAT is a very captivating albeit cerebral story about a family’s history. It speaks to a larger sentiment of family secrets and hidden skeletons, particularly to those affected by WWII. While I can’t say that I entirely agree with Goldfinger’s approach to telling this story, I did think it was entertaining. I will admit that I found myself cringing in certain scenes, simply because I felt like I was intruding. These types of uber-personal documentaries bring voyeurism to a whole new level of uncomfortability. Essentially, we’re always acting somewhat voyeuristic when watching documentaries but it becomes overbearing when we become hyperaware to our intrusive act.