Star Trek the Next Generation boldy goes into theaters 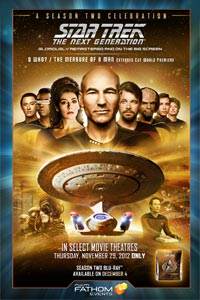 This fall, Trekkers across the country can “make it so” with “Star Trek: The Next Generation – A Celebration of Season 2,” a one-night in-theater event on Thursday, Nov. 29, at 7:00 p.m. local time. Showcasing the series’ ongoing multimillion-dollar restoration, this special event will feature two of the most popular episodes from the second season: “The Measure of a Man” and “Q Who?”. The version of “The Measure of a Man” will be the first-ever extended cut of a “Star Trek®” episode, with the world premiere of 12 never-before-seen minutes during this special event. Additionally, fans will be treated to a sneak peek of great behind-the-scenes special features including a very special cast reunion, a documentary and an unseen outtakes/bloopers reel.

Tickets for “Star Trek: The Next Generation – A Celebration of Season 2” are available at presenting theater box offices and online at www.FathomEvents.com. For a complete list of presenting theater locations and prices, please visit the web site (theaters and participants may be subject to change).


“We’re excited to give fans a rare chance to see ‘Star Trek: The Next Generation’ on the big screen, and be the first to see portions of new, original content that will be available on the season 2 Blu-ray,” said Ken Ross, executive vice president and general manager of CBS Home Entertainment.
Presented by NCM® Fathom Events, CBS Home Entertainment and IGN, this event will be broadcast to more than 550 select movie theaters across the country through NCM’s exclusive Digital Broadcast Network.
In addition to the two episodes featured in this event, fans will be treated to a sneak peek of newly-produced, historic 25-year reunion footage of the main cast members of “The Next Generation,” entitled “Reunification - 25 Years After Star Trek: The Next Generation.” Audiences will also see a specially-edited cut of “Making it So: Continuing Star Trek The Next Generation” – a first-hand perspective of the making of the second season, including the production of “The Measure of a Man” and “Q Who?”. Members of the show’s special effects team will reveal the secrets behind the creation of the villains The Borg, and writer Melissa Snodgrass shares stories about her landmark episode, “The Measure of a Man.” Additionally, fans will see a selection of outtakes and bloopers, transferred from original 35mm film for the first time.
“After the overwhelming success from this summer’s ‘Star Trek: The Next Generation - The First Season’ event, we couldn’t wait to bring the second season of ‘The Next Generation’ back to the big screen,” said Shelly Maxwell, executive vice president of NCM Fathom Events. “This in-theater event is packed with exclusive, never-before-seen content and interviews, including a historical reunion of the cast members that no ‘Star Trek’ fan would want to miss.”
Created by Gene Roddenberry as part of the “Star Trek” franchise, “Star Trek: The Next Generation” was produced 21 years after the debut of the original “Star Trek” series. Featuring one of the most endearing ensemble casts in television history, “Star Trek: The Next Generation” took fans on the remarkable continuing voyages of the Starship Enterprise, set in the 24th century from the year 2364 through 2370. With 178 episodes spread over seven seasons, it ran longer than any other “Star Trek” series.
“Star Trek: The Next Generation – The Second Season” Blu-ray will be available as a five-disc set on Dec. 4. The collection includes all 22 episodes; the extended version of “The Measure of a Man”; the brand-new cast reunion; a two-part, in-depth documentary on the making of Season 2 entitled “Making It So: Continuing Star Trek: The Next Generation” – Strange New Worlds (Part 1), and New Life, New Civilizations (Part 2); and a gag reel that was created from newly-recovered 35mm film elements and transferred for the very first time to high-definition.
CBS is a proud and long-standing supporter of the American Red Cross and will continue to show its support through this event. CBS will make a financial donation to support the Red Cross which shelters, feeds and provides emotional support to victims of disasters; supplies more than 40 percent of the nation's blood; teaches skills that save lives; provides international humanitarian aid; and supports military members and their families.
Posted by Bob Ignizio at 12:13 AM