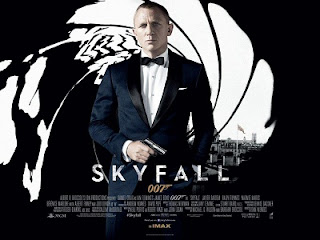 Everyone has a favorite 007 actor and film, but James Bond movies are typically only as good as their villains (Stavro Blofeld, Karl Stromberg, Max Zorin), henchmen (Jaws, Nick Nack, Odd Job), and incendiary set pieces.  If a film’s bad guy isn’t memorable (DIE ANOTHER DAY) or the action in the climax doesn’t match or surpass the excitement of its pre-title gambit (GOLDENEYE), then it’s probably regarded a mediocre entry in the half-century old franchise.

SKYFALL boasts a delicious villain in Raoul Silva (Javier Bardem), but there aren’t any other distinguishable thugs. And its dénouement pales to its pulse-pumping opening sequence, which has Bond race a motorcycle over rooftops in Turkey before brawling on a speeding train.  There are two remarkable hand-to-hand fights—including a snazzy-looking fisticuffs silhouetted against a neon skyline, but neither pits Bond (Daniel Craig) against Silva.

Craig comes out swinging in his third appearance as 007, but by Act II his spy reduced to just another hero playing SHANE while holed up against a posse of bad guys.  There isn’t much Bond about him (until the epilogue, anyway), which is a shame considering this final shootout occurs at the Bond family home in the Scottish Highlands.

The twenty-third official 007 film from Eon Productions pretends Craig has been Bond for like, ever, rather than a mere six years.  Jokes are made about his age (Craig is 44), his injuries, and his being “played out.”  But there are also references to his resilience. He’s a survivor and shadow-dweller, a bulldog specializing in “close shaves.”

The age theme is something of a head-scratcher given Craig practically just inherited the role from Pierce Brosnan (GOLDENEYE, DIE ANOTHER DAY) and remains in enviably great shape (he spends at least twenty minutes shirtless here).  It’s also a tired movie trope; LETHAL WEAPON did the “we’re too old for this” schtick decades ago, and Chris Nolan’s BATMAN trilogy wrapped up with the superhero-coming-out-of-retirement bit just this summer.  The ROBOCOP and ROCKY series also traipsed through the , to mixed results.  It’s also been done before in the Bond universe:  The non-canonical NEVER SAY NEVER AGAIN had Sean Connery portray an aging operative who must flush out his “free radicals,” shape up, and prove himself all over again.

Here, Craig’s 007 is subjected to the rigorous training and testing you’d expect for a new agent, not a pro with several missions (and two feature-lengths) under his belt and certainly not a hell-raiser accused of having become long in the tooth.  We’re also supposed to believe Bond’s marksmanship is squirrelly because of his shoulder wound, yet he blows up a pair of fire extinguishers with two well-aimed pistol shots halfway through the adventure (Three minutes later, he’s unable to shoot a stationary Silva from fifty feet away; it’s inconsistent writing.).

Ah, but we just go with it.  This is James Bond, people!  He’s driven cars underwater, rowed gondolas on land, and jumped boats over peninsulas.  He routinely leaps from airplanes without a parachute (he saves his chutes for cliff-diving off lofty ski slopes).

A terrific front-end sequence sets Bond in pursuit of a mercenary who’s stolen a hard drive containing secure data about undercover NATO personnel.  Bond’s boss—motherly hen “M” (Judi Dench)—insists Bond and rookie partner Eve (Naomie Harris) retrieve the information at all costs, lest MI6’s agents be compromised.  Devastating punches are thrown, shots are fired, and Bond makes novel use of a crawler-excavator shovel, but—for reasons that can’t be explained without spoiling things—he fails to get his man.  Instead, he’s sidelined for weeks with a critical injury and develops a drinking problem.

But after the data hack leads to a catastrophic bombing at MI6 headquarters in , it falls on squarely on Bond to protect “Mum” and find those responsible.  He tangles with an assassin in a high-rise, seduces Severine (Berenice Lim Marlohe) in , and dodges Komodo dragons in casino den.

Meanwhile, M must defend MI6 to Mallory, whose colleagues think the agency’s usefulness ended with the Cold War.  Hers isn’t an easy task, given our villain’s vendetta is private and personal instead of public and global.  Silva’s not out to steal nuclear missiles, irradiate the gold supply in , or colonize space.  He just wants revenge. On her.

It isn’t until seventy minutes in that we even meet the criminal mastermind and are made privy to his motive:  Silva’s ex-MI6, and he’s sore with M for “betraying” him during a botched last mission.  The grudge is heavy, but Silva’s light in the loafers, which makes for a hyper-real first encounter with Bond.  Audiences aren’t accustomed to 007 villains making passes at the womanizing spy, so Bardem’s protracted introduction / monologue is that much more sensational, and his chemistry (verbal and physical) with a captured Craig results in a tense (but funny) scene that’ll get audiences talking.

Director Sam Mendes and his writers dispense with the tech on display in the Brosnan films, opting instead to return the world’s greatest spy to his more refined roots.  Accordingly, Bond receives his trademark Walther PPK pistol—and he eventually winds up behind the wheel of a sleek Aston-Martin DB5.  He also meets his new quartermaster, “Q” (Ben Whishaw), who remotely assists in a cat-and-mouse chase through the tube.  The series’ invisible cars and jet-packs are swapped for hunting rifles and combat knives.  Indeed, SKYFALL scoffs at reliance upon gadgetry any fancier than gun grips with palm recognition sensors.

“Not exactly Christmas,” says a disappointed 007.

“Were you expecting an exploding pen?” asks Q.

Despite the reintroduction of a few familiar Bond elements, SKYFALL may leave some aficionados scratching their heads.  The principal antagonist from the two preceding films (Mr. White) is apparently still at large, and neither he nor his criminal Quantum organization receives mention.  And while Bond’s CIA buddy Felix Leiter (Jeffrey Wright) is absent, 007 receives an abundance of help from everyone else—so much so that his “nobody does it better” reputation is dampened.  Craig spends an inordinate amount of time walking, running, and hiding.  It’s atypical behavior for Ian Fleming’s iconic, dashing, can-do character.  The notion of flight is contrary, in particular, to the brusque, damn-it-all, death-wish Bond we saw in the last two installments.

Mendes wisely injects a little warmth and humor into the proceedings, upping Bond’s quotient of one-liners and accommodating several grace notes (like the recitation of a Tennyson poem) from Dench’s benevolent bureaucrat.  Craig’s contemporary “dark” Bond is tempered by just enough by flourishes from the character’s history (dry vodka martini, anyone?) to equalize his past with his future.  So SKYALL isn’t as much an example of an old dog being taught new tricks as it is a case of Craig’s new dog embracing Connery’s (and Roger Moore’s) old-fashioned ways.

Sluggish middle and underwhelming finale notwithstanding, SKYFALL is a sleek, thrilling, welcome addition to Eon’s Bond portfolio and near-perfect picture with which to commemorate 007’s fiftieth year on the big screen.  All the pieces fall neatly into place for inevitable follow-ups, right down to the coat rack in Moneypenny’s new office.

Happy Birthday, Commander!  See you down the gun barrel.