What happens when a man with suppressed bipolar disorder discovers his wife cheating on him with one of her coworkers? 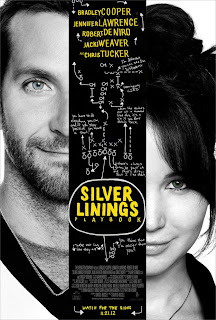 Director David O. Russell tries to answer this question in SILVER LININGS PLAYBOOK, his first film since the success of THE FIGHTER. Russell has become increasingly efficient in telling focused human stories about people who are relateable, but just a little different than the rest of us. In this case it's Pat Solitano (Bradley Cooper), a man whose life has been turned upside down by his adulterous wife, Nikki (Brea Bee). Upon the discovery on his wife’s affair, Pat beats the man she is cheating with within an inch of his life. This earns Pat eight months in a psychiatric ward and a restraining order against his wife and their former workplace, a school.

When Pat is released, he goes home to live with his mom (Jackie Weaver) and dad (Robert De Niro), but he doesn’t find any relief there. His father is a Philadelphia Eagles junky, and bets on them every week while simultaneously keeping up his superstitious behaviors. Meanwhile, Pat is determined to win his wife Nikki back. Everyone in Pat’s life, including his therapist (played hilariously by Anupam Kher) tries to get Pat to move on, while also controlling his anger. Pat has many triggers for his anger, but his wedding song is the worst of them all: it's the same song that was playing when he found his wife cheating on him.

In the midst of trying get back on his feet, Pat meets Tiffany (Jennifer Lawrence, imbuing the role with real sincerity). Tiffany’s husband has recently died and she looks to rebound with, well, really anyone. It becomes immediately clear that Pat has met his match. From here on the movie revolves around Pat and Tiffany, and the struggle for both to find what it is they want.

The film's strength rests in its performers, especially Cooper who brings much realism to his character. You can see something boiling underneath - the weight of trying to win his wife back, build a relationship with his father, and struggle with whether it’s okay to like a new girl all seems like too much. Jennifer Lawrence has moments of brilliance throughout the film, and we see De Niro playing the regretful father wonderfully.
Chris Tucker also appears in the film as an acquaintance to Pat from the psych ward. Tucker doesn’t add any necessary elements to the story, but his comedic relief is welcome. It’s one of the best ensemble casts of the year.

As is the case with many of Russell’s films (THREE KINGS, I HEART HUCKABEES), he shows great control over all aspects of the film. The editing keeps pace and the audience follows along every step of the way. It’s a nice film to watch and it includes a wonderful soundtrack. 3 out of 4 stars.
Posted by Joseph Anthony at 12:01 AM