Repost: The Imposter (November 24th and 25th at the Cleveland Cinematheque)

[THE IMPOSTER screens Saturday November 24th at 9:45 pm and Sunday November 25th at 6:30 pm at the Cleveland Cinematheque.] 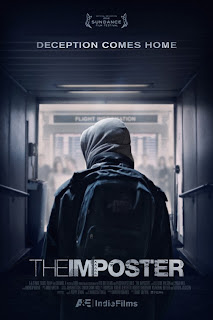 If a child of yours went missing, and then 3 years later someone claiming to be that child showed up on your doorstep looking and sounding nothing like who they claimed to be, would your desire to have that child back be enough to make you accept them? That's the question at the heart of THE IMPOSTER, a documentary about a real case in Texas where something like what I've just described apparently happened.

That Frédéric Bourdin, the person claiming to be Nicholas Barclay, was not who he claimed to be is beyond dispute. Bourdin was several years older than Nicholas and looked nothing like him. He knew almost nothing about the boy he was trying to impersonate. And yet, as we learn through interviews with Bourdin and the Barclay family, his deception was successful. Then again, maybe it wasn't. Maybe Bourdin wasn't the only one spinning a web of lies.

Both in terms of subject matter and style, Director Bart Layton's film feels very much like the documentaries of Errol Morris. It's a true-crime tale with a lot of ambiguity in the varied accounts of the participants, and while many questions are clearly resolved over the course of the film, others may never be. There is some re-enactment of events, but mostly the film focuses on the first person stories of those involved, with Layton managing to get just about all the important players to appear on camera. 3 1/2 out of 4 stars.
Posted by Bob Ignizio at 12:00 AM