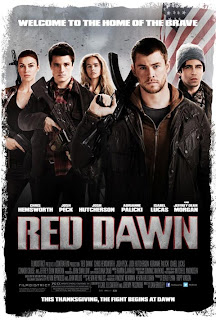 Having finally given up on their nuclear program, North Korea decides instead to attack the United States of America by using EMP bombs and paratroopers in RED DAWN. The portion of the invasion we witness takes place in Spokane, Washington where a group of high school kids and one twentysomething marine (Jed Eckert, played by Chris Hemsworth) fight back against the Asian invaders in a ninety minute commercial for the NRA. You know how they're always saying we need assault rifles so we can fight back against tyrannical invaders/Democrats? This is that fantasy brought to life. And lest you think the rather high number of casualties suffered by the patriots might put a damper on said fantasy, just remember that to some, there is no better way to go out than a hero's death.

The original 1984 RED DAWN may not have been a great movie, but it captured the tenor of its times and exploited it well. It was the height of the cold war era, and the possibility that the USSR might attack America at least felt like a legitimate fear. And it was a fear that crossed party lines; whether you were a Democrat, a Republican, or an independent, chances are you believed the Russians were our enemies and intent on doing us harm. In such a climate, a story about a few well armed American teenagers waging guerrilla war against Soviet invaders held fairly wide appeal.

The biggest problem in trying to update this material for the 21st century is that there simply isn't a comparable enemy power to the USSR. The filmmaker's at first opted to have China fill that role. But while China's military power is nothing to sneeze at, there aren't too many people being kept awake at night worrying about a military assault by the People's Republic. On the other hand, economically they're a force to be reckoned with, and the possibility of losing out on the lucrative Chinese market made the producers reconsider their villains. So a few digital alterations later, the bad guys in this RED DAWN are the North Koreans. Really? The guys who can't even launch a missile right?

After a long career as a stunt coordinator and second unit/assistant director, Dan Bradley takes the reins here for the first time. He does manage a few nice shots here and there, but his experience working on the BOURNE films shows in his sloppy, incomprehensible action sequences. On the plus side, the cast is good, bringing more gravitas to the material than one might expect even when trading in tired clichés like the sibling rivalry between Jed and his hot-headed brother Matt (Josh Peck). That counts for something, but not nearly enough to make it worth your while to sit through this tired retread. 2 out of 4 stars.
Posted by Bob Ignizio at 12:01 AM