Possession (November 29th and December 1st at the Cleveland Cinematheque) 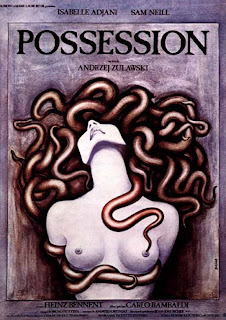 A marriage falls apart in spectacular and bloody fashion in Andrzej Żuławski's off the rails 1981 film POSSESSION. Mark (Sam Neil) has been deeply involved in his job as a spy of some sort (the specifics are kept vague), barely spending any time with his wife Anna (Isabelle Adjani) and son Bob (Michael Hogben). When Mark finally decides to leave work behind to focus on family, it's too late – Anna wants a divorce.

Although Anna claims there isn't anyone else, Mark doesn't believe her. Nonetheless, he agrees to move out and give Anna custody of Bob. Before long, however, both Mark and Anna begin spiraling into madness. Mark becomes obsessive about saving the marriage, even as all doubt regarding Anna's infidelity is removed. But is Heinrich (Heinz Bennett) Anna's only lover, or is there someone (or something) else? And why does Bob's teacher Helen look exactly like Anna, only with different eye and hair color?

POSSESSION often gets lumped in with the horror genre, which is about as fair as any attempt to categorize this film could be. After all, it includes scenes of self mutilation with an electric carving knife, a handful of brutal murders, and sex scenes involving a slime-dripping tentacled monster. And yet those looking for some kind of lurid gore fest will likely find POSSESSION slow going. It's a good 45 minutes before the film even starts veering into horror territory, and when it does it's clear that the horror elements in the story are meant to be seen primarily as symbols for the toxicity of Mark and Anna's relationship as it damages not just them, but their woefully neglected child, their friends, and anyone else who happens to get near them.

Neil and Adjani both turn in spectacular scenery-chewing performances, their on-screen relationship recalling Burton and Taylor in WHO'S AFRIAD OF VIRGINIA WOOLF? Only this time there's a real child involved who has to suffer for their dysfunction. Even as POSSESSION uses this as a jumping off point for some truly bizarre plot developments, it always feels like an emotionally accurate depiction of a relationship trying to survive well past its time. Sure, these characters behave irrationally, but so does anyone going through a bad breakup, or even a particularly bad patch in a relationship. Hopefully in real life they make it through one way or the other without the murder and mutants. 3 out of 4 stars.