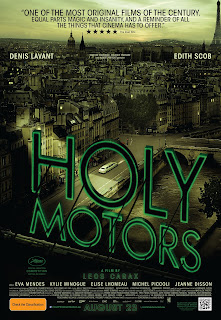 Even if you can't quite appreciate the film itself, it's impossible not to be impressed by Denis Lavant's performance. Like a modern day Lon Chaney, he completely disappears into each of his roles. Even though we're always aware that he is an actor playing an actor playing a scene (within a scene), the artifice of it all disappears thanks to Lavant's completely believable performance(s). It should go without saying that every movie is "not for everyone", but with weird little masterpieces like this that goes double. 4 out of 4 stars.