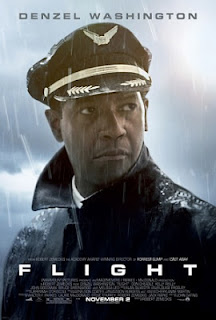 Denzel Washington’s jet pilot in FLIGHT is so smooth he can calm passengers after some nasty turbulence while (unbeknownst to them) at the same time adding a little booze to his morning O.J.


But that’s just it—Denzel’s cool here comes from a bottle.  That, and the lines of coke he snorts to perk up.


is Whip Whitaker, an ostensibly all-together ex-Navy pilot who until now has kept his substance abuse on the down-low.  Even when he’s a mile high.  Literally and pharmacuetically.


Director Robert Zemeckis (BACK TO THE FUTURE) has orchestrated some terrific-looking, white-knuckle plane crashes before—most notably in his last live-action feature, CAST AWAY—but he ups the ante here.  Despite Whip’s blood alcohol content hovering at twice the legal limit for operating a car, he says and does all the right stuff after a freak equipment malfunction cripples his SouthJet airliner.

Invoking the black box that records every word uttered in a cockpit, Whip instructs a stewardess to say goodbye to her son—just in case.  Then he has his newbie copilot drop the landing gear and ailerons to increase drag, and dumps the fuel to lighten the craft and minimize the likelihood of a fiery impact.  And then he inverts the plane, flying upside-down to slow their rate of descent.  One of the wings cleaves a church steeple before Whip plows the jet into a field.


But FLIGHT is less about piloting 737s than heeding the primal stress response of “fight-or-flight” you read about in Biology 101.  After years of running from himself, Whip must learn to confront his demons and stop the cycle of abuse that may or may not have contributed to the disaster.  Applying the brakes on a lifetime of runaway lies doesn’t come easy for the pilot, especially when airport bureaucracy seems so willing to clean up his mess.


Whip awakens with minor injuries and is told his quick-thinking saved almost all “102 souls” aboard his plane.  But he knows after watching news broadcasts and cell phone video replays of the crash that people will come to him wanting answers.  Or an explanation.  Anything that'll force logic's template on the event.


The cancer patient who joins Whip and heroin addict Nicole (Kelly Reilly) for a smoke in a hospital stairwell suggests the “accident”—and their chance meeting—is the work of a higher power.


God, chance, providence…. Nicole thinks it’s the chemo talking.  Whip doesn’t care, so long as he gets his fix.  And he falls off the wagon (and out of the Lazy Boy) not long after sequestering himself at his grandfather’s farmhouse.  Nicole plays at guardian angel, but Whip’s hip-deep in denial and only tells people—including union rep Charlie (Bruce Greenwood) and defense attorney Hugh (Don Cheadle)—what they want to hear.


Never mind Captain Whitaker’s toxicology report, says Hugh.  The ten stone-cold sober test pilots who recreated the fateful flight in a simulator couldn't replicate Whip’s stunt.  Faulty equipment doomed the airliner, he argues.  Whip saved it.  And Hugh could convince the Feds, too, if only his client would dry out for a week.


Whip’s coping skills are anything but miraculous during the National Transportation Safety Board inquest.  He belittles Nicole, causes a scene at his ex-wife’s house, and further alienates his estranged son on the eve of his own hearing.   He awkwardly approaches his stewardess and now-paralyzed copilot to gauge whether they’ll incriminate him; they know he’s a boozer.

“Tell them it was just like any other day,” Whip offers sheepishly.


’s done heavy drama before ( ON , TRAINING ), but here he displays the calculated reasoning of a highly functioning alcoholic—one who’ll fabricate any lie and muster whatever poise needed to get that next belt of liquor.  One minute he’s dressed to the nines and comports himself with secret agent swagger.  Next, he’s sleeping off a binge on a bathroom floor.  Never before has a hotel mini-bar been cast in such menacing light onscreen.


and Cheadle are effective as G-men thrust between a rock and a hard place by Whip’s drinking.  Reilly imbues Nicole with childlike innocence, but her sweet Southern veneer hides quiet strength; the former junky has her own reasons for getting clean.  John Goodman appears twice, stealing both scenes as Whip’s fast-talking pusher and skin-mag provider, Harley (“I brought you a copy of Ass Masters”).  His large, loud presence (along with a couple gags on organized religion) nearly abducts the picture to the realm of black comedy, but Zemeckis stays his course, veering back to Whip while deftly avoiding a rehash of other recovery flicks.


FLIGHT is a curious, volatile, decidedly adult-oriented character study that questions why we don’t exercise more control over the things in our lives we actually could.  How much of our day is truly left to chance?  What if the door hadn’t been left open?   Did I leave the oven on?  What if you’d said this or done that?  Would the outcome be any different?  That fork in the road—if a tree were destined to fall on my car had I gone left, will misfortune still find me on the right?


The soundtrack features Barenaked Ladies (“Alcohol”) and Rolling Stones (“Sympathy for the Devil”)—good tunes for the mea culpa crowd.  Who among us hasn’t let a little lie swell until the levee breaks and we’re left soaking wet?
This one'll go gangbusters as an in-flight movie in a couple months.