[THE EYE OF THE STORM screens Saturday November 24th at 7:25 pm and Sunday November 25th at 3:45 pm at the Cleveland Cinematheque.] 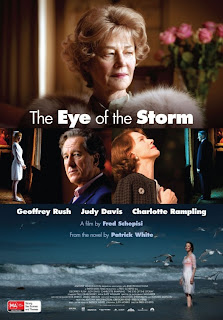 I hate Thanksgiving, I really do. There are lots of reasons, and I had the pleasure of ranting about it at length a few years ago in an obscure book. In the essay, I recalled the many uncomfortable Thanksgiving family reunions I've had, in which as everyone sat down to a feast, my more successful relatives (which is just about all of them, even the children) talked about their wealthy deals and their burgeoning finances and their exquisite capital gains in the stock market.

Me? I'd be like, "I sold an article for $30...I know an agency that might buy my photos for $25...or less...My pay cut at the newspaper wasn't as bad as the other freelancers had...I found a half-dollar in the street." And so on. It didn't matter that I have the best family imaginable. I'm the most pathetic and least successful of all of them, and at this so-called harvest time, when everyone is expected to celebrate and show gratitude for the largesse of their labors, I never have much of anything to show for it. Oh, I got to see AMAZING SPIDER-MAN for free in previews, does that mediocrity count? Too bad about the incipient home foreclosure, mounting credit-card debt, and another year's worth of job-application turndowns on the other side of the personal ledger.

In that sense, I guess, the Cleveland Cinematheque's booking for Thanksgiving of THE EYE OF THE STORM is masterful timing, although the movie has no overt Thanksgiving theme whatsoever and is, in fact, an Australian production. I don't even know that Australia has a Thanksgiving (or would ever have the bad taste to do a Thanksgiving). But it is about family reunions and money, and the less-monied members of a family shamefully grubbing around for handouts and facing their failures. That's sure the thanks-for-nothing Thanksgiving I know.

The picture is based on an acclaimed Australian novel (with which I have sadly no acquaintance) and set in the early 1970s. A wealthy Down Under matron aptly named Mrs. Hunter (Charlotte Rampling) has long been a figure in the highest circles of Sidney society and politics. But she's also been sexually profligate, her many love affairs chasing her husband off the estate to his lonely death and contributing to general family dysfunction. Now, with Mrs. Hunter suffering a stroke and seemingly without much longer to live, her long-estranged adult children fly in from overseas, to attend what they anticipate as her death - and the bounty of her will.

The two aged `kids' are Dorothy (Judy Davis), who married into European royalty, only to be dumped by her prince for a food heiress, and Basil (Geoffrey Rush), a knighted stage actor in England who seems to be in a bit of a slump. Both are eager to get Mrs. Hunter's fortune - or at least make certain she hasn't disowned them, possibly in favor of leaving the money to her onetime lover, an aspiring prime minister. Or to the motley retinue of nurses and servants who pamper her in her offsprings' absence. It's not as though the children don't love their mother - but Basil describes it at the outset as more of a calculated performance than a tender farewell.

During their stay, Dorothy, Basil and the servants all jockey for the loot. Mrs. Hunter drifts in and out of reality, and flashbacks fill in for us some of the traumas of the dynasty's past, in particular a memorable storm regarding Dorothy that was both literal and emotional.

This is very much an actor's feast of rich dialogue and meaty characterizations, even if none of the protagonists are exceptionally likable (but not completely dislikable either), and director Fred Schepsi is occasionally obvious in the symbolism of showing wormy fruit and rotting victuals at posh banquets. This was executive-produced and acted by Australian movie royalty, Geoffrey Rush (great to see him outside of a gimmicky CGI pirate fantasy) and Judy Davis (whose actor-husband Colin Friels also has a small role), and they're obviously savoring grownup material they can really sink their thespian teeth into. It's also nice to see well-seasoned performers break tradition and go where few actors these days ever go, with lined faces and age wrinkles unashamedly on full display. In my world (admittedly, not a popular one) Charlotte Rampling as she really looks today is preferable to a Hollywood face-lifted Frankensteinian plastic-surgery nightmare of Charlotte Rampling, even if she can kiss goodbye to any notion of going on Dancing With the Stars.

I can't say that THE EYE OF THE STORM uplifts the spirit very much, but it did so more for me than Thanksgiving has in recent memory, and the drama is rendered as if actual adults were in the audience, with not a single teenage vampire or werewolf in sight. You know I had to put that in there. 3 out of 4 stars.