[DREAMS OF A LIFE screens Wednesday November 28th at 7:00 pm at the Cleveland Museum of Art.] 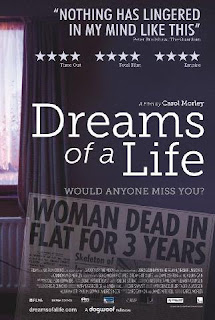 Anyone remember Yvette Vickers? The glamor-girl 1950s actress-model-pinup was perhaps best remembered for blonde-floozy parts in stuff like ATTACK OF THE 50-FOOT WOMAN and ATTACK OF THE GIANT LEECHES. Vickers was a bombshell who dated some big-time Hollywood superstars and power players. Even in her old age she had "cult" cred with the horror crowd, as her B-movies resurfaced on video and TV reruns. In 2011, Vickers was found dead in her neglected Los Angeles bungalow. She had literally become mummified.

A longtime recluse, not on speaking terms with her family, she had evidently died at home and lain there for a year. You can bet there are screenwriters right now competing to bring the Yvette Vickers story to the big screen, and big-name pneumatic starlets (all of them from the TWILIGHT series, something tells me) ready to shove each other down various flights of stairs to get the ultra-sexy Oscar-bait role. Oh, and potential mummy f/x by Rick Baker, don't forget.

It would have to go a long way to beat DREAMS OF A LIFE. This acclaimed new British documentary comes from a UK filmmaker named Carol Morley, who I am given to understand built a reputation on somewhat autobiographical chronicles of the young and the doomed in her generation. Here she uses a haunting blend of re-enactment and witness interviews to put flesh on the bones (literally) of a tabloid tragedy from London in 2006, when authorities belatedly discovered the skeleton of a woman, Joyce Vincent, in her small apartment above a bustling shopping complex. Compared to Joyce, Yvette Vickers was indeed an underachiever; Miss Vincent had been dead three whole years - her skull and remains ghoulishly sprawled around a pile of unwrapped Christmas presents, in front of a TV set that was still on and running (no, I can't tell you what channel; in this country they'd brag about that fact in their promotions).

There was, of course, the English social-services scandal of why a body remained so long unnoticed in a nanny-state metropolis. But quite apart from that was the nature of the dead woman. Joyce Vincent had been no shut-in senior-citizen ("pensioner," they call it there) but an attractive 38-year-old, with three sisters, series of former boyfriends and suitors, and erstwhile workmates and acquaintances. She was remembered as having held enviable job positions, in showbiz and high finance. Former friends, lovers and co-workers are interviewed here, in a sort of cinematic post-mortem. Joyce looked like Whitney Houston, says one, and Vincent did indeed circulate on the fringes of music-industry stardom and London club-hopping. So what happened?

Morley alternates between the RASHOMON-style contrasting testimonials and actress Zawe Ashton in flashback dramatized scenes as the secretly lonely and melancholy Joyce - and recreations of  cleanup crews in 2006, trying to decontaminate the death scene. Since Joyce Vincent may have taken up with an abuser near the end,  her demise may or may not have been a battered-woman crime or a suicide - extreme decomposition had left the cause of death impossible to determine (and no, this film doesn't show any grisly autopsy snapshots or replica skeletons). But Morley's real inquest is into the extreme isolation of the heroine. Vincent is not there to explain herself, but she certainly fell through the cracks of society, too easily and utterly.

Despite the unanswerable enigmas and ever-so-slightly voyeuristic feel, this is nonfiction drama of haunting quality, as when Morley digs up some of the very few recordings the live Joyce Vincent left behind, and a chill goes up your spine. A fair portrait of the mystery woman? We'll never know. But this cold-case investigation ensures that the obscure Joyce Vincent won't soon be forgotten. One wonders how many others like here are out there. (3 1/2 out of 4 stars)