I'm trying to get caught up with the films I missed this year before making my obligatory “Best of the Year” list. Most were reviewed by other writers here on the Cleveland Movie Blog, but a handful slipped through the cracks for whatever reason. So to what degree I can, I'll be reviewing some of these films we missed the first time around that are now available on home video. First up, a trio of “B” action flicks: THE RAID: REDEPMTION, LOCKOUT, and SAFE. 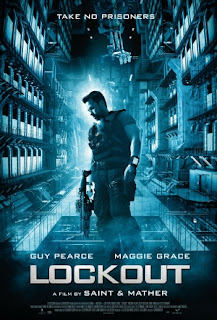 Producer Luc Besson continues his quest to become the modern day king of Euro schlock cinema with LOCKOUT, a cheap but reasonably fun knock off of John Carpenter's ESCAPE FROM NEW YORK. Instead of Kurt Russell as Snake Plisken, we get once promising actor Guy Pearce as “Snow”. And instead of being sent into a New York City turned prison colony to save the President's daughter, he's sent to a space station to save the president's daughter, here played by Lost alumni Maggie Grace. LOCKOUT also has a subplot about Snow trying to clear his name for a murder he didn't commit. Vincent Regan and Joseph Gilgun are fun as the brothers leading the inmate revolt, but they can't compensate for Pearce, who's no Kurt Russell. Still, if you're in the mood for this kind of trashy old school sci-fi/action B movie, LOCKOUT should kill an hour and a half fairly well. 2 out of 4 stars. 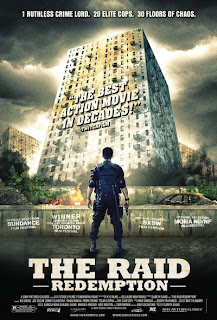 THE RAID: REDEMPTION is a non-stop fight-fest directed by Gareth Huw Evans, a Welshman who now calls Indonesia home. The premise concerns an Indonesian SWAT team that stages a raid on an apartment building controlled by vicious drug lord Tama (Ray Sahetapy). It doesn't go well, and the surviving cops must fight their way through floor after floor of bad guys to survive. Basically this is 90 minutes of people shooting, punching, and stabbing each other. It's like watching somebody else play Mortal Kombat, only without the depth of characterization. The fight scenes are well choreographed and shot, but the entertainment value is minimal when you don't have any characters to really care about. I'm enough of an action junkie that I was able to get some enjoyment out of the film, but not that much. 2 out of 4 stars

Note: The Blu Ray of THE RAID: REDEMPTION includes both the original score and dialogue audio tracks as well as an English dubbed version re-scored by some guy from Linkin Park. This review is based on the original version. 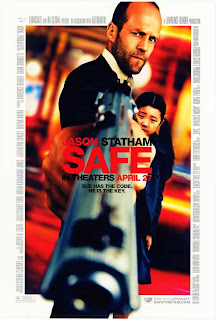 There really aren't that many modern day Enlish-speaking action heroes who belong on the same level as guys like Stallone, Schwarzenegger, Eastwood, and Willis. In fact, Jason Statham is about it. So while SAFE is a pretty typical “burned out cop gets a lease on life by protecting a little kid on the run from gangsters” movie, Statham's presence manages to lift it above mediocrity. His charisma and prowess in the fight scenes make the cookie cutter plot seem... well, not fresh, but at least not as rancid and moldy as it really is. Credit is also due to writer/director Boaz Yakin(FRESH, REMEMBER THE TITANS). Well, at least the director part of that equation. Probably because he wrote this schlock, Yakin tries his best to make this a really good movie. He doesn't quite succeed, but he does at least manage to deliver a fun grade B action flick, and that's good enough in my book. 2 1/2 out of 4 stars.