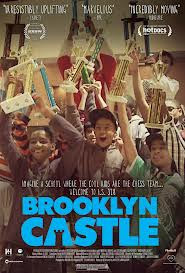 I am so cynical now. Blame it on movies. Years ago I might have seen a documentary like Katie Dellamaggiore's BROOKLYN CASTLE and written a glowing review about how much it elevates the spirit, restores your faith, turns darkness to light, removes waxy buildup, helps shed those annoying pounds etc. Now I just think this true inner-city school nonfiction is merely a promo-preview-fundraiser for the MAIN big-studio product.

You know, a theatrical movie adaptation telling much the same story - a teacher'n'the hood deal in which a plain-jane Nice White Lady (Charlize Theron, Kate Bosworth, Jennifer Love Hewitt, Beyonce with Caucasian makeup) in a dull sweater vest comes to some ghetto educational facility and uses the wonder of learning, or something, to turn at-risk young lives around and save the kidz from the streetz. Same thing happened to SMALL WONDERS (alias FIDDLEFEST), a Cleveland International Film Festival favorite that, a few years later, wound up being made into a scripted uplifter called MUSIC OF THE HEART (which I confess inordinate fondness for mainly because it's one of Wes Craven's atypical non-horror directing jobs). Meanwhile BROOKLYN CASTLE is here for as many crowd-pleasing points as a documentary reasonably can be.

The setting of BROOKLYN CASTLE is IS (Intermediate School) 318, a junior-high facility educating a lot of kids in high-poverty households in the Bedford-Stuyvesent neighborhood of NYC. For reasons never explained, the Chess Club at IS 318 really took off, and now not only is it “cool” to be a chess kid in these hallways, but IS 318 leads all junior-high chess clubs in competitions across the country. This is no small thing, as a chess scholarship can be the ticket to a bright future for the underprivileged kids.

We meet assorted Chess Club members: Rochelle bids to be first black American female chess Master, but she can't let up on her other academic studies, either. Pobo, son of African immigrants, is not only a chess player but also a candidate for class president. He runs as "Pobama" on a campaign promising "hope" (that detail's getting out of date pretty fast). Justus and Patrick are chess players a little less sure of themselves or their games, and it reflects in their troubled personal lives.

The Wall Street collapse of 2008 (which it occurs to me I haven't heard any presidential candidates talk about how they're planning to avoid a second one. Remember how many politicos talked about going to any lengths to prevent another 9/11? But stopping another Wall Street meltdown? No big priority. Like finding bin Laden wasn't important to Bush, I guess) shakes the NYC educational system. Budget cuts hitting IS 318 endanger both the marching band...and the celebrated Chess Club and the kids who rely upon it.

But [SPOILER ALERT, YEAH RIGHT] it all ends joyously, with come-from-behind victories, restored self-esteem/funding, and a student chess match in Ohio (a short one, in Columbus, sorry). Even the lady teachers who coach the young Chess Club members are Hollywood slim and Jessica Chastain-pretty. If a documentary could have a narrative and a conclusion chosen by audience focus-groups, this would be it.

One thing this movie doesn't do is try to inform non-chess playing viewers on the intimate details of the game. The upside is no time squandered sweating out moves and counter-moves to various squares, rather meaningless to those of us unfortunate to be chess-illiterates. Still, I'm sure those who do know their knights from their pawns might find this as spellbinding as, well, SPELLBOUND, the spelling-bee documentary that had me riveted.

Give it a few years and BROOKLYN CASTLE will likely be rebooted, with a Denzel or a Meryl, a hip-hop soundtrack featuring an Oscar-bait pop-tune, and a rote script with at least six writers credited (twice as many uncredited), and a purely off-the-rack scene where the worried teacher meets a chess kid’s parents at the ER at night following a drive-by (nothing the likes of which happens here). The title? I don't know, how about CASTLE BROOKLYN? Meanwhile don’t let my slightly jaded POV checkmate your seeing this. (3 out of 4 stars)
Posted by Charles Cassady Jr. at 12:01 AM