Argos provide a range of Panasonic TVs to watch all your favourite movies on. 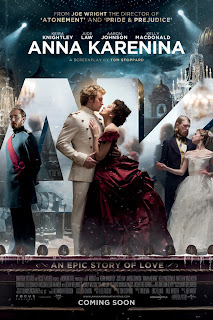 With about a dozen filmic adaptations to its name, Leo Tolstoy’s classic 1877 novel, Anna Karenina, is one of the most enduring and recounted stories of modern literature. There’s no question as to why – the tale is layered thick with an exultant, ridiculous mess of glorious GD human emotion, from the most tragic throes of depression to white-hot passion at its Crest-strips whitest.

Even so, with a story and characters that have been so prolifically reprocessed into cathartic cinema fodder, the unavoidably cynical question of any subsequent retelling  becomes, “Okay, Bub… so what’s yer gimmick?”

In ANNA KARENINA, the newest multiplex re-imagining of the tale from director Joe Wright (ATONEMENT) and screenwriter Tom Stoppard (ROSENCRANTZ AND GUILDENSTERN ARE DEAD), the hook is a cozily worn-down English theatre in which Wright shot a majority of the film, transforming, at various times, the rigging into the back alleys of urban Moscow, the stage into a racetrack, the floor into a ballroom, and the balcony into, well, a balcony. But a different balcony. When used to its fullest potential, the effect is an arresting, a kinetic swirl of leads and extras, backdrops and scene changes - life in 19th century Russia performed as an elaborate, narrative dance.

If it sounds pointlessly showy, don’t worry. It’s anything but. Though the film starts with an establishing flurry of set changes and half-danced character introductions, once the story settles into a rhythm, so, too, does Wright’s use of the space. As we meet Anna (Keira Knightley in her third Wright outing), her steely husband Alexei (Jude Law) and the dashing Count Vronsky (KICK-ASS’ Aaron Taylor-Johnson) – a cavalryman and the passion-baiting object of Anna’s eventual disgrace - the characters whirl around each other, the enclosed theater space  used to represent  the insular nature of Imperial Russian high society, with the measured choreography of their movements invoking the prescribed codes of conduct and etiquette that keep the elite waltzing through their lives in mechanical, harmonized lockstep.

Amid several beautiful, heart-stopping theatrical set pieces, including a ballroom gala and the aforementioned horserace, we watch as Anna’s and Vronsky’s affair  draws the couple out of society and into self-contained drawing rooms that recall more staid – though always concisely furnished – sets of traditional period dramas. More than that, when the two do emerge back into the wheeling fray of society, Wright renders the effect marvelously, stalling and halting the motion of the Russian elite in the wake of Anna’s unapologetic indiscretions.

Flung amid the emotional tumult, the cast fares well. More so even than the visual potential for spectacle, KARENINA's stage play style confronts the actors with an interesting challenge: the certainly out-sized emotional pathos of Tolstoy’s writing is well suited to the heightened movement and volume required of large-scale theater acting… and yet, the entire business unfolds on the screen, and contains just as many moments of intimate intensity as it does proscenium-echoing grandiosity.

While Knightley and Taylor-Johnson do a commendable job (they are, of course, tasked with the largest range of feeling and action) it’s Jude Law’s performance as Karenina’s slow-searing husband – all cold eyes and tortured moral superiority – that really dazzles.

Along with the indoor sets, Wright also filmed a spare number of wilderness scenes, most of them centered around young Konstantin (Dohmnall Gleeson), who throws himself into farming while pining endlessly for the love of the beautiful Princess Betsy (Ruth Wilson).

Like I said, not pointlessly showy. If anything, the purposeful deployment of scenery and setting ultimately makes the film feel almost as prim and measured as other more boilerplate classical adaptations.

Going into ANNA KARENINA, I feared that Wright might attempt to mimic the frantic incandescent bombast of Baz Luhrmann’s ROMEO AND JULIET or the eccentric bacchanalia of Julie Taymor’s TITUS – not because I dislike those films, but because I respect Wright enough on his own artistic terms that I want to see him elude simple comparisons.

For as well-crafted and considered as KARENINA is, I almost felt that I could do with a little more chaos – a bit more bombast or eccentricity.  Wright’s last film, HANNA, for example, pulsed with an irresistible energy that managed to punch through Wright’s meticulous framing and, along with the movie’s bizarrely heavy-handed fairy tale imagery, create something as unapologetically flawed as it was compellingly dynamic. ANNA KARENINA tries to capture the same visual energy while maintaining the stalwart performance-driven emotional core of his prior adaptations, ATONEMENT and PRIDE AND PREJUDICE. And largely, it succeeds.

Really, my only complaint is that, given all of Tolstoy’s emotionally hemorrhaging angels, wretches, demons, and whores, this spunkier, livelier KARENINA is just pristine enough to betray the fascinating mess it could have been. (3 out 4 Stars)