[A ROYAL AFFAIR opens in Cleveland on Wednesday November 21st exclusively at the Cedar Lee Theatre.] 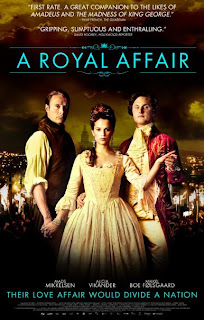 In the late 1700s a king, a queen, and a doctor form a tragic love triangle that has far reaching social and political ramifications in A ROYAL AFFAIR. The story begins when Queen Caroline (Alicia Vikander) agrees to marry King Christian VII of Denmark (Mikkel Følsgaard), seeing it as the culmination of everything she was raised for. However she is unprepared for the King's erratic behavior and callous treatment of her. After dispensing with her most important duty as queen, providing Christian with a male heir, Caroline does her best to live her own life. Christian lives his own life as well, setting out on a tour of Europe that mostly involves getting drunk and visiting prostitutes.

Many in the court believe the King is insane, but based on what we see it's just as likely that he's bored at not having anything to do. That changes when his new personal physician Doctor Johann Friedrich Struensee (Mads Mikkelsen) begins sharing his enlightenment era ideas with both King and Queen. With Struensee's encouragement, the King finds the backbone to start making actual decisions about his kingdom. Struensee shares more than just ideas with Caroline, and the two embark on a passionate affair. All three work together to bring progressive ideas to the Danish government, but as they disrupt the status quo it's no surprise that they make enemies along the way. And with Struensee's lack of discretion, it's not hard for those enemies to learn of the affair and use it against him.

All this is more or less a true story, although being a bit rusty on my Danish history this reviewer can't speak to its accuracy. Regardless, A ROYAL AFFAIR offers a compelling story brought to life with considerable visual aplomb by director/co-writer Nikolaj Arcel and cinematographer Rasmus Videbæk. There are several stunningly beautiful shots in the film that wouldn't be out of place framed and hanging on a museum wall, but the film is just as capable of conveying the down and dirty side of late 18th century Europe. It's somewhat less successful at conveying the heat and passion in the central love story between Caroline and Struensee – the chemistry is there between the performers, but the way it plays out on screen often feels stiff and distant.

Fortunately the film offers plenty of interest to make up for its less than sizzling romance, giving each of its principal characters strong individual arcs. Struensee goes from doctor of the people to practically being King himself, growing careless with his newfound power. Christian may well have some mental issues, but he's more bored and insecure than anything else. His friendship with Struensee gives him confidence and, at least for a while, allows him to enjoy life. As for Caroline, even though to a large extent she serves mainly as our point of view, recounting the events of the film in a letter to her children, we get to see her grow as well. Sheltered and naïve when we first meet her, by the end of the film she knows all too well how the game is played. 3 out of 4 stars.

As Published on Examiner.com