[A LATE QUARTET opens in Cleveland on Friday November 16th exclusively at the Cedar Lee Theatre.] 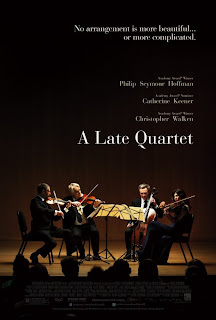 The bond of family endures both good and bad, in the best of times and the worst. In A LATE QUARTET, we witness a family in disarray. The Fugue Quartet is one of the most highly regarded classical quartets in New York City, and even if their bond is merely professional, they nonetheless care for each other like family.

The four members of this classical quartet have been playing together for over twenty years. Early in the film we discover that the eldest and most respected member, Peter (Christopher Walken), has been diagnosed with Parkinson’s. The news rattles the group, who have to figure out how to go forward. Peter has had an unfortunate year, recently having lost his beloved wife, and he tells the group it may be time for him to walk away.

Two members of the quartet is married, so they at least are family in a very literal sense. Juliette (Catherine Keener) and Robert (Philip Seymour Hoffman) play a troubled couple for the second time in the last 5 years, having previously done so in Charlie Kaufman’s SYNECDOCHE, NEW YORK. Their experience working together shows in their performances, and they are convincing and engaging as a paring.

Their daughter Alexandra (Imogen Poots) is not part of the quartet, but is a striving violinist herself under the tutelage of both Peter and Daniel (Mark Ivanir). Daniel is the last piece of the quartet and the obsessive first violinist in the group. Robert see’s the group’s uncertainty as his chance to finally vocalize his discontent over being the group’s second violinist for his entire career. He proposes alternating between first and second with Daniel. The idea falls flat with the other musicians, and Robert is forced to swallow his pride.

How much does one sacrifice in order to keep the family happy? Each member will be tested with this question. As in real life, the answers are never easy to come by, if you can come by them at all. One problem leads to another, until it seems our quartet might be lost for good.

It is always so fascinating to watch the dynamics of a group. Naturally a group has leaders and followers. The problem is every so often the followers find themselves less content and seeking change. In a way, musicians have the extra burden of not only functioning as a group, but having to function before an audience as well.

Director Yaron Ziberman, in his first attempt at a major motion picture, hits all the right notes. The film is beautifully shot, carefully written and masterfully acted. Walken's performance brings a needed warmth and gentleness to a film that often feels cold and fragile, and deserves to be acknowledged for it. Too often he has been handed roles unworthy of his depth, but here he shows there is so much more for him to give. Mark Ivanir also deserves praise for his take as Daniel. Listed against some of our most prominent actors working today, Ivanir stands his ground and is truly convincing.