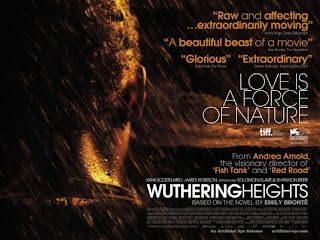 Cruelty begets more cruelty, and life is so filled with misery and regret that by the end, death must seem a mercy. That seems to be the message contained in WUTHERING HEIGHTS, the latest adaptation of Emily Brontë's classic novel of unrequited romance. Somehow this writer has made it through 40-some years of life without ever having read Ms. Bronte's novel or seeing any of its prior screen adaptations, so this review is based solely on the film itself.

The plot concerns a young black man named Heathcliff (Solomon Glave as a young boy; James Howson as an adult) who is taken in by Mr. Earnshaw (Paul Hilton) and brought to live at his home of Wuthering Heights along with his son Hindley (Lee Shaw) and daughter Catherine (Shannon Beer as a young girl; Kaya Scodelario as an adult). Heathcliff and Catherine are drawn to each other romantically, which is just one more reason for Hindley to despise his adopted brother. When Mr. Earnshaw dies, Hindley takes over the estate and makes Heathcliff a servant, but he's not the only one who will suffer; much pain and tragedy awaits for all the characters.


Director/co-writer Andrea Arnold emphasizes this in her minimalist approach to the material using mostly hand-held photography framed in a 1:33 aspect ratio (like pre-HD TV for those of you not up on your film nerd terminology), a gloomy color palette, an absence of any non-diegetic music on the film's soundtrack, and numerous dispassionate shots of nature, including some unflinching scenes of animals being killed. There is also precious little dialogue, although perhaps that's fortunate given the often impenetrable accents and murky sound mix. It's a dreary, slow moving, and frequently ugly film that is a real chore to watch.

Perhaps if at least one of the characters in this tale were likable, or even interesting, it might be easier to stay invested for two hours. Arnold has stripped her film down so much, though, that we barely get know any of the characters beyond their surface traits. Even the central tragic romance has no depth, as we are given no reason for Heathcliff and Catherine to be attracted to each other besides proximity. Everyone eventually winds up trying to ruin everyone else, and it's hard not to feel as if they all deserve what they get. A cursory reading of the Wikipedia entry on the novel reveals this is more or less accurate to the source material, but surely there must be something else to the book than this for Heathcliff and Catherine to have endured as iconic, tragically romantic figures who have inspired so many prior film adaptations, not to mention a song by Kate Bush. 2 out of 4 stars.